Over the years most of us have an issue (or 100) with our tanks. This week, it was my turn for a not so little issue so I started this thread to share my "adventure" and invite others to share as well.

While cleaning the tank and changing the filter, I kept feeling water on my head. Only a few drops now and then and initially thought it was my messy water change dripping from the top. Then I felt a spray from inside the cabinet. After bit more investigation and several saltwater showers I realized that the hose barb inside one of the return lines had completely broken with something less than 1/2 inch remaining on one side and the rest of the barb still inserted into the tubing. I could hold the two pieces together but not release them. I kept trying to get the pieces to stay long enough to get off the floor and get to the phone (Neal was an hour away) but all I managed was to take another cold saltwater shower. After an hour of playing little Dutch boy, I spotted a clamp j u s t within reach that was on the table with my grandson's Lego storage project. I spent the next hour trying to find a way to clamp the *&%$# thing but there were not squared edges. Ultimately, I found the clamp was just the right size to wedge between the cabinet opening and the back of the SCWD to keep the flow to a slow drip into the sump. By this time Neal was close to leaving the office anyway but at least I could get to a

a towel (for me and the floor) and start looking for large containers.

Neal had to try his hand at messing with the problem while I started cleaning containers. He managed to get more water on the floor and walls as well as something electronic and got shocked (the main unit is on a ground fault but it did not kick). We did not have the breaker marked so we shut down the whole house because we could not get to the socket. After a few choice words (more about the situation than at each other), we agreed we needed to drain the tank to below the inlet line (about 90 gallons - rooky mistake in our design). We had a properly sized hose barb in our collection of parts and Neal was able to force the broken part forward enough to reattach the line. We used up the 20+ gallons of new water plus much of what we drained and the tank is back in operation.

Clean up crew (full sized shrimp, white hermit crabs and pencil urchin) survived but I am not sure about the abalone. The other abalone (both Asian market "rescues") did not survive a power outage where the chiller did not keep its setting and went unnoticed for a couple days. This time the water stayed below 80 so I am hoping the remaining abalone survived this as well but it is so rarely seen I may not know for months. 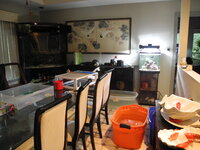 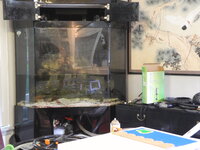 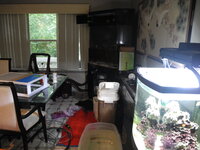 Addendum 8/2
We seem to have additional, unrelated water problems this month! Our frig drain was clogged and our water dispenser hose developed a leak, both sending a quantity of water to the basement and kitchen floor. When it rains, it floods

I am glad you didn't have any cephs in there! Sounds like it was quite the adventure. I hope the cold saltwater showers don't dissuade you from coldwater tanks.

@Taollan, No, but your freezing students and early morning swims do dissuade me from wanting to dive in the Northwest

Are we limiting this to salt water?

ekocak said:
Are we limiting this to salt water?
Click to expand...

Ah, OK, well the very first octopus tank I set up when I was a teenager had what I think was a mercatoris. I had it for about 3 weeks before it ripped the prefilter off of a powerhead and mangled itself to death.

Oh my goodness, I can't look, I can't imagine

ekocak said:
Ah, OK, well the very first octopus tank I set up when I was a teenager had what I think was a mercatoris. I had it for about 3 weeks before it ripped the prefilter off of a powerhead and mangled itself to death.
Click to expand...

Let's hear the freshwater one

Let's hear the freshwater one

Well, in high school I was really into south american cichlids. I had just had a fairly bad ich outbreak in another tank and was really worried about it spreading so i bleached all of my equipment and then let it soak in buckets. Evidently not enough. I managed to kill two very large convict cichlids I was very fond of, and it was entirely my own fault.
You must log in or register to reply here.
Share:
Facebook Twitter Reddit Pinterest Tumblr Email Link