Editor's Note: Carol created this article for Jersey Pets Magazine (Editor: Lisa A. Kelley). Lisa's Website can be visited at www.jerseypetsmagazine.com. The article is slated to be published in their Jan/Feb issue. Thanks to Jersey Pets Magazine for spreading the good news about cephalopods! My fascination with Octopuses started about 25 years ago. At that time, not a lot was known as to their care. It was thought, as long as you had a saltwater tank, run by any kind of filter and sealed to prevent escape, they would do fine.After many attempts at housing these creatures, it got to be a family joke that I could not keep these captivating animals alive.

What kept my interest in these amazing creatures, were the many incredible abilities they possess. An octopus has the ability to change to whatever color object they may be near. They are masters at disguise. Their eyesight is equivalent to our own. They are extremely intelligent and have the ability to think things through. This has been documented in labs where an animal has crawled out of its tank, across a floor to the crab tank to dine and then returned to its own home. They also can alter their shape and have been known to squeeze through the tiniest of openings.

Many years after my first attempts at keeping them, I stumbled across a Website, TONMO.com, (The Octopus News Magazine Online) created for people who had the same obsession that I had. Much has been written on the appropriate care and needs of these animals. I decided it was time to attempt ownership again.

My tank was a 44 Gal. Pentagon, located in my bedroom. I learned I needed what is called a Protein Skimmer, which removes solid proteins and ink, which an octopus produces when startled or threatened. I also learned carbon was a necessity to remove other toxins in the water, as octopuses are very messy eaters as well as produce a lot of waste.As to a filter, I utilized a large Eheim> Canister, which is not the filtration of choice these days, but money wise would work. The specifications, as far as water quality, they need full strength seawater, which means a salinity reading of 1.23 to 1.25, Ph should be between 7.9 and 8.2. The tank needs to cycle for a period of at least 3 months until the water parameters become stable. Any ammonia, plus a tank that has been treated with copper, is fatal to an octopus. Constant water testing and water changes are mandatory to maintain optimum water quality and can be as frequent as once a week. Knowing what species that is available is also mandatory in determining the correct tank size and individual needs.

I placed a call to a Fish Supply in California, who stocks tank raised O.bimaculoides, commonly called a "bimac", which is a pacific octopus found off the coast of Southern California and Mexico that would do reasonably well in the 44 Gal. I requested a delivery time as close to 4pm as possible. We were able to track the octopus's progress through the FedEx Website. Truly amazing, that with in 24 hours my new pet would be a traveler of the USA and arrive on the Jersey Shore!

Delivery day came, and my 6-year-old daughter and I arrived at home, to anxiously await the arrival. Finally the moment came. Up front arrived the FedEx truck with the precious cargo. We waited at the door, signed for the little box and rushed inside to open it. Inside was a scared, weak octopus, curled up, the size of a 50 cent piece. We started the acclimation process, a drip line from the tank to the bag, and allowed the tank water to replace the bag water 2 fold. 45 minutes went by. When it was time to put her in the tank, she wouldn't come off the plastic. She weakly tried to squirt water at us. I ended up putting the whole bag in the tank so she could come off at her leisure. Ink, as my teenager had named her, stayed attached to the bag. Little by little, I cut the plastic away from her, hoping she would come off on her own. Poor thing must have had quite a traumatic journey, as she was definitely attached to the plastic! 24 hours passed, I looked in to check and she was off, sitting on the glass, flashing colors at me.

Feeding was a fun source of enjoyment for my daughter and me. Octopuses eat crustaceans, fish, snails, crabs and some have a fancy to scallops. Basically any fresh seafood can be offered. Jessica and I would go "mucking". This involves a net, bucket and water shoes. We would collect hermit crabs, green crabs, fiddler crabs, shrimp and killies and keep them in a smaller saltwater tank so Ink had a fresh supply of food. We also bought bait at local bait shops. People used to donate food when they heard what we were feeding. One time, to test Ink's intelligence we put a fiddler crab in one of those plastic containers you get out of a gumball machine. Took her a few tries, but she learned how to open it! They also like to play. For example, we gave Ink one of my daughter's large Lego pieces.She learned to grab on to the Lego, which floated at the top of the tank and gracefully float down to the bottom.We always knew when Ink was playing as the Lego would be in a different position in the tank. She also was very curious. Anytime I needed to do anything concerning maintenance with the tank, out would come Ink to watch. Should she happen to get a hold of my tools, I would not be able to get them away from her until she was done. I had rigged a claw with a sponge to clean the inside of the glass.Ink grabbed hold of it one day and ended up playing with it for about an hour. She never tired of harassing me in this way!

Today, it has been six months since we received Ink by FedEx. We have enjoyed her company enormously.She has entertained numerous visitors in our household. 2 Weeks ago her behavior changed. She went from constantly watching us plastered to the front of the tank, to hiding from us, being startled if we walked up to the tank. She also started collecting any shell she could find and stockpiling them at the entrance of her cave. I discovered one day, she had laid eggs and was in fact protecting them. It was a fascinating discovery, but a sad one as well. When an octopus lays eggs, they stop eating and spend every minute of the rest of their short lives protecting those eggs. There are exceptions to this rule, and I am hoping Ink will be one of those. Her eggs have since disappeared, I believe due to the population of shrimp that reside with her.To date she has resumed eating, so my time with her may be prolonged a little longer. The process of an octopus's life coming to an end is a sad one to witness.Ink has moments where I see her old personality emerging, but the majority of the time she spends in her cave, I assume protecting her eggs, which have since vanished. She will eventually stop eating and pass on, which is very sad to my family, and me but we have come to terms that to own one of these animals, you need to be ok with their short lifespan and enjoy every moment and encounter that you experience with them.

We have since called California again, and 3 weeks ago the FedEx truck arrived again, this time with an octopus that was the size of a dime.My daughter has named it "LiL Pumpkin"! We are sad Ink will be passing soon, but the arrival of the new baby will make her passing a little easier. Each octopus's personality is entirely different so we are excited to see how "Lil Pumpkin" progresses! I already can see an octo with an attitude! Ink has enriched our lives tremendously and I hope by sharing my time with her, other people who may have an interest in these fascinating creatures, will learn how to maintain them correctly! I highly recommend research at TONMO.com as this site is for anyone contemplating adding a ceph to his or her home.The knowledge and guidance is truly a necessity for the successful keeping of these creatures. They need protection as much as our furred and feathered friends do.

Special thanks to Nancy King, moderator of TONMO.com for contributing her expertise in assuring the facts of this article were correct. And also to the creator of TONMO.com, Tony Morelli for without his Website, I would never have attempted to enjoy another octopus. 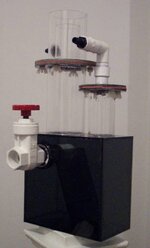 Do-it-yourself skimmer for your cephalopod tank By: Lawfish - June 8, 2003 I would like to make several comments before I begin this article. First, I do not intend to represent that I invented this type of skimmer. I based the design upon a Skimmer which was built by a member of Reef Central... 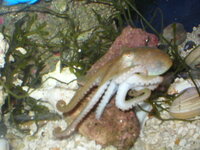 Best practices in cephalopod transport By Richard Ross (Thales) Several people have recently asked how I ship cephs, so I thought I would write up what I do and stick it on the blog for posterity. I am hoping to ship some cephs in the next few weeks and if I do, I will try to update this... 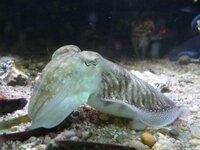 by Colin Dunlop - 2004 Ever since I became interested in keeping cephalopods as pets I have tried very hard to help out other people as much as I can. This has included answering questions on message boards and posting pictures wherever possible. My original site, soon to be discontinued, was... 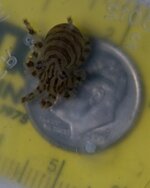 Richard Ross (Thales) welcomes discussion on this article in the Exotics and Rare Species forum. Octopus chierchiae is a small rarely seen octopus from Panama/Nicaragua. I was able to obtain 3 animals, 2 male and 1 female, and was able to mate them and have had a successful brood and hatching...

Cephalopod Care
Tankmates: It Works Until It Doesn't

I'm writing this article to document the result of adding an octopus to an established fish tank. On April 15, 2009 I caught a batch of six newly hatched O. briareus from one of my commercial stone crab traps in Biscayne Bay Miami, Florida. All six juveniles were placed into a fully-stocked 125...

Great story. Thanks
Just to help define the life span of a captive bimac:
I've caught and kept several local (Southern California) bimacs, the smallest was about the size of a silver dollar when it curled up. I kept it in a chilled tank at about 55-58 degrees (F), fed it sparingly (about 4 cc of thawed frozen scallop every 4-5 days), and used local filtered seawater for water changes. It lived two years before it laid eggs and died. The others all lived between a year and eighteen months, depending on how large (old) they were when I caught them. I suspect that they progress through their life span much faster at higher temperature and with more food. That's not science, but it was my experience, and would be an interesting hypothesis to test