Hello, I’ve recently posted a thread about my octopus breathing abnormally, but now that’s cleared(taps on wood) I think I will start a journal about my tiny Friend, today I have given her/him their first enrichment activity. I use a one use syringe and put some frozen shrimp in it and put it in, but to my unknowing the syringe is able to float. But then the he/she immediately comes out and inspect the syringe, but it soon gave up as he/she is obstructed by the plunger and move to his/her spot next to the filter, and soon started to swim all around the tanks showing colours that probably say “where’s my food” after 30 minutes of Swimming I decided to remove the plunger from the syringe and(it still floats XD) and then he/she decided to swoosh in and take everything. (All while he/she is floating around in the syringe XD) after a short while, he/she returned to their burrow in the rocks to enjoy the shrimp. Any ideas for future enrichment activities for he/she (i should come up with a name well)

(The syringe with shrimp) 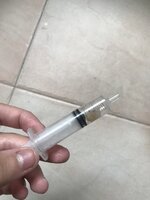 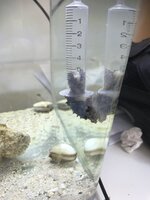 The video might be corrupted so I’m going to briefly go through what he/she did: octopus extent tentacles into syringe tip to touch shrimp, but syringe then float away. Octopus now sad, turns dark colour and hides away
N

Well, after five days I’ll have to inform that my octopus might be dying, it’s losing control of its arm(can’t detach) and when detached it’s like a corkscrew(i heard it’s bad) and it’s having a pale coloration.
N

Sadly, you are describing what we typically see at the end of life. It is unusual to see one looking as healthy as in your video (I can down load it to view but can't view directly) go into senescence quite this quickly (though it is often a short dying cycle). I would check for ammonia/nitrite in the water and do a large water change even if it comes up with zeros.

Sorry this turned so quickly @Newbie80022 -- please let us know what you think caused this / any further observations.