TONMO.com held its first Conference in Monterey, California on August 5, 6 and 7, 2005. Check out our dedicated forum (with lots more pics). So, here's my account:

Friday: me and my family arrived in the afternoon, and basically took it easy. Went out for ice cream in Monterey, did not do anything cephy. I did not attend the MBARI tour, so someone else will need to post about that!

Saturday: The events on Saturday, August 6th took place at the Monterey Conference Center. My family and I got there just before 8am, and people started milling in between 8 and 9:30 as requested. I did not get a total head count, but my guess is somewhere around 35 to 40 people (??). 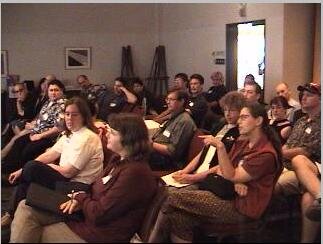 Pipsquek (Jonathan Roberts) showed up with "Big Red", which is his outstanding (and very heavy) bronze sculpture of a male octopus. After we got situated we started -- I spent a while going through my presentation. The event began with acknowledgement for Rob Williams, a.k.a. OctoBloke on TONMO.com, who passed away earlier this year. The event was dedicated in his memory, as he was very excited about the TONMO.com community, and our first conference. 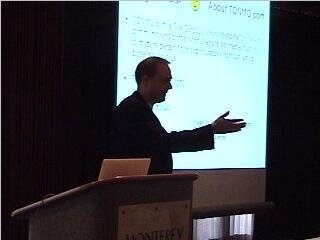 Geoff Von Saltza, a teacher from MAOS, got up and showed a video clip about the school, spoke about the programs, and answered some questions from the audience. His presentation gave insight into student activities and focus of study. Without a doubt, it's the coolest high school in America! 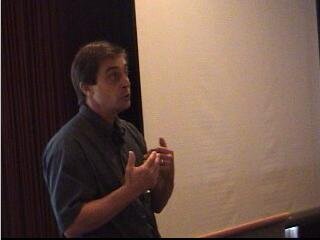 Richard Ross (Thales) then gave a detailed presentation on cuttle keeping. Thales' presentation was funny, lively, and extremely rich in content (which was a prevailing theme on the day, by the way). He was clear that he encourages the responsible breeding of cuttles such that we might better understand these creatures. He definitely spoke with passion and authority, and clearly an hour wasn't long enough (another prevailing theme). 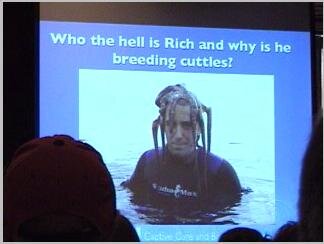 Then Eric Hochberg gave a fascinating presentation on pygmies and giants (specifically dosidicus gigas, which was given lots of coverage throughout the day). He showcased some rare photos and deep content on subject matters including sexing squid and what we know about certain mating behavior. He also spoke a bit about overlaps in species and the evolution of some misidentifications of species, which seem to be the source of some confusion when trying to standardize common understanding of specific squid and their behaviors. He went deep into his subject matter and we were all quite gripped.

Next came lunch! We all went our own ways; I went out to this great pub (I believe it was called Britannia) with my family.

Back at the conference, after lunch, Erich Orser and Greg Ewald talked about cephalopod imagery in art. The presentation was definitely something to behold. Erich pulled out the best of the best with regard to artistic representations of cephs, pop culture (e.g., Ed Wood, Squiddly Diddly, etc.), and propaganda. For budgetary reasons, they were unable to secure permissions to reproduce some famous ceph art (such as The Dream of the Fisherman's Wife), so Greg utilized a white board to sketch it up! Of course, Cthulhu was also covered in loving detail. This presentation was well-researched, fun, and very thought-provoking. I've now decided that no TONMOCON event would be complete without a section on art and imagery -- these guys nailed it! 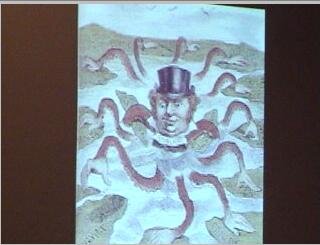 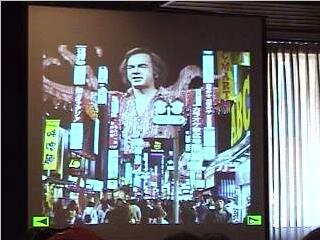 Also, unfortunately Skot Olsen's art did not arrive at the event in time, but Erich walked through images of the work that was supposed to be on hand. We missed having Skot's work phyisically there but we did get a chance to enjoy the images and discuss it from the powerpoint presentation. Also, there was an extensive display at the side of the room of cephalopod art, and also things for sale such as t-shirts and Rona's ceph plushies. See the video below for the full spread. (For those wondering, the frequent Neil Diamond references and the lamenated article is a community-joke involving Dr. Steve O'Shea and his "kidnapped" article on Neil, which once adorned his workspace, until the twisted Tintenfisch got hold of it).

TONMOCON 1 art display
Lou Zeidberg gave an enthralling presentation on cephalopods found off the Bay (and elsewhere). There was one video of dosidicus (I believe?) feeding that was just incredible. He proceeded to show 45 minutes of raw footage captured (mostly, if not exclusively) by their deep-sea ROV. There was no audio for this, so we basically watched this footage and pounded him with questions. It was a truly fascinating dialogue and visual experience, which was not taped due to respect for the value of the content. I will, however, share this image from his desktop, of Michael Landon carrying a squid ashore. 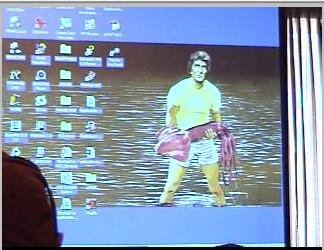 Dr. William Gilly then presented on current events related to the work he's doing with regard to tagging dosidicus and monitoring their migration habits. He shared video, images, charts and graphs in what was probably the most content-rich presentation of the day. While each presenter could surely have gone on for more than an hour and would have kept us in our chairs, Dr. Gilly's presentation was so full of "red meat" that it really was a shame we couldn't get more of his time. Again, no video to offer on this presentation, which was a worthly climax and finale to a great day of presentations.

He later offered the group to come visit him at the Hopkin's lab:

We lost the room at 6pm, and needed a few minutes at the end to clean up the room, and... ah yes, to meet and get pictures of such unspeakable horror and evil, that I almost can't bear to recount the wretched event. (In fact I wanted to get some pics of us all laying around the floor at Cthulhu's feet, like carnage, but alas when Cthulhu enters the room Chaos does invariably reign).

My son quite astutely identified him as a "dragon squid" (from left-to-right, that's Erich Orser, Cthulhu himself, and Melissa Hope. Strangely, Cthulhu and Greg Ewald (cthulhu77) were never in the room at the same time): This all set the stage quite well for a quick break and a meet-up over to the Crown and Anchor, where kilted men wailed on bagpipes, to the thrill of many, and the chagrin of a few. We dined on fish & chips, and I did partake in the Drake's Deep-fried Calamari myself, as did A Rabid Squid and I believe Mr. Orser when he and Greg and their S.O.'s waltzed-in in a fashionably-yet-appropriately late manner.

Here's one of those bagpipers:

Bagpipes at TONMOCON I
We spent a few hours on that porch, breaking occassionally to marvel at the kitchy-type wallpaper in the bathroom and take advantage of its other, more primary functions. I can't recount all the conversations, but as you can see from some of the pics, we had fun.

Clearly, Neil is a force to be reckoned with: 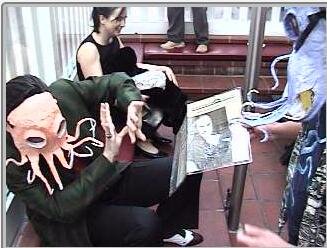 I realize I promised many of you who couldn't go that I'd have a pint on your behalf; here's me making good on that: 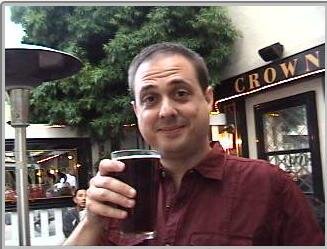 We had many revelers. Clockwise from the upper right, we have cephkid, his father (Steve, I believe), Melissa, Shanlyn, Tom, Fujisawi Sake and his wife Rebecca, and Angus, in this shot. 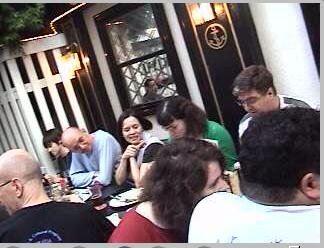 From left to right, we have Chrono_war's dad, Chrono_war, Rona, and CephKid across the table. 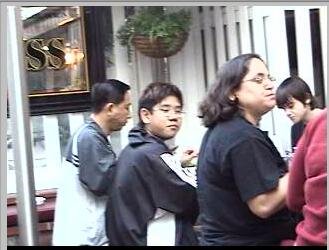 And here we have Richard Ross (Thales) on the left, and A Rabid Squid is on the right. In the background (far right), you can see Chrono_War talking with CephKid. Chrono's dad is seen there at the end of the table behind A Rabid Squid. 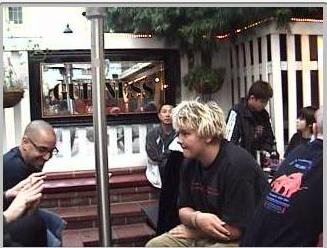 And here is my beer, with A Rabid Squid just on the edge there, and Monty, and my wife Tania and our kids on the right. 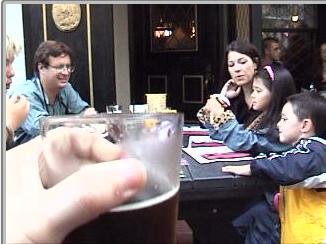 And here, from right to left in a fleeting glimpse, is John (Fujisawi Sake), his wife Rebecca, and Rona. 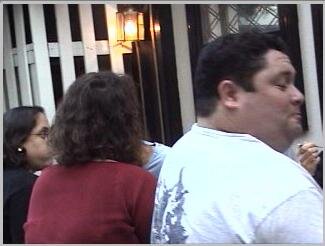 On Sunday, I thought I'd meet up with everyone at Hopkin's and in Dr. Gilly's lab, but it was not meant to be. My family and I got on our own schedule and couldn't make the 1pm meet-up time at the gate. I did get to the aquarium though, and although both GPO's were in hiding, I was able to see the jellies... Clem, did I mention you were missed? 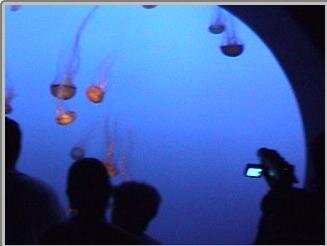 Here's a short video clip of the octopus display at the gift shop. In another spot, I found a copy of Mark Norman's Guide to Cephalopods of the World, which I purchased.

Gift shop at Monterrey Bay Aquarium
My family and I then went on the famous shoreline "17-mile drive" later in the afternoon, which was a great way to end our trip.

It must be done again! Onward to TONMOCON II! 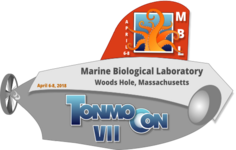 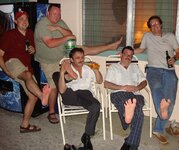 Location: Mote, Sarasota, Florida Date: June 23rd (informal) and 24th (presentations) Hey everybody! Here is our agenda for TONMOCON II in Sarasota, Florida, at Mote on June 23rd and 24th. Dr. Steve O'Shea will be joining us and will be our "headline" speaker, addressing the topic of 'Giant... 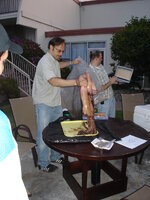 Since 2005, every two years TONMO.com members and staff get together in a chosen city (usually near an aquarium or research center) for a day or two of intense cephalopod discussion and socializing. It's open to everyone: students, hobbyists, professional biologists, and land-lubbers like me...