(Mollusca: Cephalopoda: Ommastrephidae)
with comments on egg-mass susceptibility to damage by fisheries trawl

The egg mass and embryos of the ommastrephid squid Nototodarus gouldi McCoy, 1888 are reported for the first time, their identity confirmed by mitochondrial 16S rDNA sequence determination. The egg mass is a free-floating gelatinous sphere of at least 1.5 m diameter and contains an estimated several thousand randomly distributed eggs; similar egg masses recorded from north-eastern New Zealand waters of 1.0–2.0 m diameter are reported. Observed fluctuations in populations for this and other squid species may be a partial result of trawl damage to the egg masses.

In recent years, nine reports of large gelatinous spheres sighted off north-eastern New Zealand have been brought to our attention. Between November 2001 and March 2003, eight of these spheres ranging from 1.0 to 2.0 m diameter were reported by divers off the Poor Knights Islands (Fig. 1); a further sighting was reported from Deep Water Cove, Bay of Islands, in November of 1997 (Table 1).

In photographs, these structures bore striking resemblance to egg masses from laboratory-spawned ommastrephid squid genera Todarodes and Illex (O’Dor & Balch 1985, Bower & Sakurai 1996). Accordingly, the gelatinous spheres were tentatively identified as the egg masses of an unknown species of squid.

This paper reports the most recently observed sphere, a 1.5 m diameter mass encountered in the entrance to Rikoriko cave, Poor Knights Islands on 26 March 2003, for which excellent photographs, film, and tissue samples are available. The egg mass sample contained embryonic squid, but the embryos were too undeveloped to attribute to any recognised taxon based on morphology (mantle and funnel-lock-ing cartilages, tentacles and arm suckers were still undeveloped). The egg mass disintegrated 2 days later, resulting in the loss of all embryos. As a precautionary measure, in the event the embryos could not be hatched, five had earlier been preserved in 90% ethanol.

Egg masses have been described or their type is known for the following squid in New Zealand waters: two Sepioteuthis and three Sepioloidea species, both of which deposit and attach eggs in gelatinous clusters to the seabed; seven locally distributed enoploteuthid squid (Enoploteuthidae) and one Brachioteuthis (Brachioteuthidae) species, all of which release eggs individually into the plankton (Young & Harman 1985; Young et al. 1985); and a commercially important squid, Thysanoteuthis rhombus (Thysanoteuthidae), for which the egg mass is described as a cylindrical structure of 0.6–0.7 m length and 0.15–0.2 m diameter (Sanzo 1929). The egg masses of the other 76 (approximate) species of squid represented in museum collections from New Zealand waters were unknown.

In the present study we have used mitochondrial DNA (mtDNA) sequences to identify the first-known egg mass of the commercially important ommastrephid squid genus Nototodarus, and describe the first structure of its type from New Zealand waters. Furthermore, in light of the tenuous nature of the egg mass, its size and bathymetric distribution, we take the opportunity to express concern regarding the inadvertent damage to or destruction of these spheres by trawlers passing through spawning aggregations of squid. In 1981, the ocean surrounding the Poor Knights Islands, off the East Coast of Northland, was established as New Zealand’s second marine reserve. This reserve extends for 800 m offshore around these islands; the taking or disturbing of any marine life within the reserve is prohibited. In anticipation of summer egg-mass sightings in this region, a special permit issued under the Marine Reserves Act by the New Zealand Department of Conservation, after consultation with the Ngati Wai Trust Board, was granted. This allowed divers to collect a sample of ~50 eggs from an egg mass from within the reserve, to enable species identification (through both morphological and DNA analyses). On 26 March 2003 an egg mass of 1.5 m diameter was sighted, and a sample of ~50 eggs was removed from it. Within 10 h of collection the egg and gel matrix was transported ashore in a container of water, returned to Auckland (AUT) and placed within a fine-meshed bag suspended within a 200-litre hexagonal tank, in which the seawater was maintained at a constant temperature of 20°C. The status of the gel and O’Shea et al.—First records of Nototodarus gouldi egg masses embryonic tissues was monitored daily. Five embryos were removed from the gel matrix and preserved in 90% ethanol solution for DNA analysis. As GenBank mitochondrial 16S rDNA sequences were not available for N. gouldi, voucher tissues were sourced for comparative purposes. Only male N. gouldi, identified on grounds of hectocotylus detail (sensu Smith et al. 1987), were used for genetic comparison, as female N. gouldi and N. sloanii cannot be reliably differentiated (they are sympatric in the area from which fresh Nototodarus tissues were sourced, the Wairarapa Coast, south-eastern North Island, New Zealand; Smith et al. 1987).

The four sequences from the egg mass were aligned to known sequences retrieved from GenBank using Clustal w (Thompson et al. 1994) and the number of pairwise differences between all sequences were estimated using PAUP*4.0b10 (Swofford 2002).

DNA was successfully extracted and consistently amplified from four embryos. The eggs measured approximately 2 mm in diameter and yielded 5.8–6.3 mg of total genomic DNA. The replicate egg samples all produced identical sequences. The resulting DNA sequences from the four embryos and the known N. gouldi sample were aligned to 60 squid sequences that were retrieved from the database GenBank. Using the genetic distance analysis the egg samples were unambiguously assigned to the species N. gouldi. The number of pairwise sequence differences between the egg samples and the five most closely related species were N. gouldi=0, N. hawaiiensis=16, Todarodes filippovae=18, Illex argentinus=19, Sepioteuthis australis=25, and Sthenoteuthis oualaniensis=31.

McGrath & Jackson (2002) estimated mature female N. gouldi oviduct-egg counts in the range 2176–82 395 and concluded that this squid releases eggs in series of small clutches, rather than in one terminal spawning event. Although the density of eggs in the egg mass here reported could not be accurately determined, we estimated that it contained at least several thousand eggs. This low estimate lends support to McGrath & Jackson’s suggestion that N. gouldi does in fact spawn more than once. However, for N. gouldi to spawn several times it must also mate several times. Balch et al. (1985) reported relative fertilisation rates for eggs spawned by a captive Illex illecebrosus(Ommastrephidae), as 15% for the first of two masses, to < 1% for the second. The reduced success for the second mass was attributed to sperm depletion, because most spermatophores were discharged to fertilise the first mass. Although Bower & Sakurai (1996) report laboratory-spawned egg masses of Todarodes pacificus with fertilisation rates of 90–95%, these females died immediately after spawning, with 93 000–110,000 eggs remaining in their oviducts.

Given the known range of intraspecific variation in egg mass diameter described for ommastrephid squid (Illex illecebrosus 0.4–1.0 m (Balch et al. 1985), Todarodes pacificus 0.4–0.8 m (Bower & Sakurai 1996)), it is possible that the nine spheres reported from north-eastern New Zealand waters all belonged to N. gouldi. If so the species must spawn off north-eastern New Zealand from late November to early April. Since the egg masses of the 75 other species of squid (excluding N. gouldi and the aforementioned taxa) are unknown, it is not clear whether or not these egg masses are truly conspecific.

Uozumi & Förch (1995) determined that most larval N. gouldi in central and southern New Zealand waters were hatched during the months of April and June. Artificially fertilised Illex argentinus eggs hatched in 5–16 days (Sakai et al. 1998), and those of I. illecebrosushatched 6–16 days post-spawning (Durward et al. 1980; O’Dor et al. 1982). Temperature determined the rate of embryonic development in both species. Eggs of the confamilial Todarodes pacificus hatched in 4–6 days (Bower & Sakurai 1996), and 7 days (Watanabe et al. 1996). If embryos of N. gouldi develop at comparable rates, then the egg-mass life span is short and paralarval squid should start appearing in the water column in December, extending through until mid April. These estimated hatching dates are considerably earlier than those proposed for this species from central and southern New Zealand waters (Uozumi & Förch 1995), indicating that N. gouldi has a separate sum-mer-spawning population in waters off and north of the Poor Knights Islands.

Development of eggs isolated from the egg mass gel in Illex illecebrosus has been described as abnormal, compared with those developing within intact egg masses (Balch et al. 1985). Collision with a trawl, or retention of the egg mass in the net itself, may destroy the structural integrity of the mass and viability of developing embryos and/or expose thousands of fragmented embryos to predation by fish and planktonic organisms. After the outer surface of the N. gouldi egg mass reported here was cut for sample collection, video footage revealed near-instantaneous predation on the inner gel and egg matrix by reef fish. Moreover, crustaceans, protozoans, and bacteria rapidly infested the egg mass once its outer layer was damaged (Bower & Sakurai 1996).

Since Nototodarus species are locally caught by both jig and trawl (Uozumi & Förch 1995), it is likely that any trawl fishery targeting spawning aggregations will inadvertently damage or destroy any egg masses present, killing the developing embryos. This impact on the earliest stages of the life cycle could be a contributing factor to fluctuating squid populations, both in New Zealand waters and on an international scale. Serious consideration should be given to introducing regulations that would limit fishing activity amid spawning squid aggregations solely to jigging techniques.

We thank Keith Hawkins (Department of Conservation), Wade Doak, Glenn Edney, Tony and Jenny Enderby, Phil Endle, Peter Mesley, Ross Armstrong, and many other divers who contributed their time and resources to look for egg masses and respond to queries on Wade Doak’s website, www.wadedoak.com. We are particularly grateful to Glenn Edney and Pete Mesley for the retention of a sample of one of these egg masses, without which this contribution would not have been possible. We are also grateful to Martin Cryer from the National Institute of Water & Atmospheric Research Ltd (NIWA), Auckland, New Zealand, for procuring fresh voucher specimens of Nototodarus gouldi; and Bruce Marshall, Museum of New Zealand Te Papa Tongarewa, Carolyn King, University of Waikato, and one anonymous reviewer for their valued critique of the manuscript. This research was supported by the Auckland University of Technology, Massey University, and the Discovery Channel (USA).

Steve O'Shea
Steve is an expert in the systematics and biogeography of cephalopods, and joined the TONMO.com staff in June 2002. He can be seen on the Discovery Channel documentary, Chasing Giants: On the Trail of the Giant Squid. For more information, see his Autobiography and Select Bibliography (2003). Dr. O'Shea lives in New Zealand.
Share:
Facebook Twitter Reddit Pinterest Email Share Link 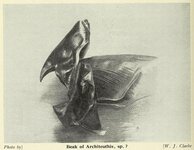 Only two Giant squid have ever been washed ashore in England. Although half-a-dozen have come ashore in Scotland and Ireland or been caught in nets in the North Sea, the tale of England’s Architeuthis is a curious one. Early on 14 January 1933, a group of bathers spotted a rather strange, inert... 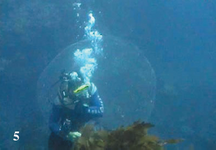 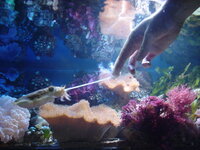 The following article was originally published by the University of North Carolina at Chapel Hill in the Spring 1998 issue Endeavors magazine. -- For generations, the monstrous-looking squid has inspired legends, tabloid headlines, and science fiction. But when you get right down to the meat of... 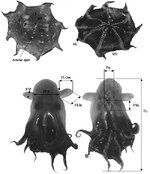 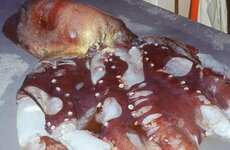