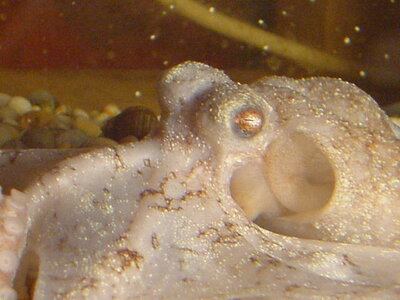 I believe that the term "suicide" means a conscious decision to end a life. It presumes that something is sentient and knows what it is doing.... I strongly disagree with referring to animals jumping off cliffs (such as lemmings) as suicides. I don't think that is suicide. In the case of wolf spiders being devoured by their young, the female is dying because of an inbuilt response - it's not a conscious decision like suicide. The female has simply lived her life and chemicals are released that start to kill her. The babies take advantage!

The same thing happens with the female octopus. When her eggs mature, she has lived her life and dies. This actually makes space for the future development of offspring and increases food for them. In addition, the young octopuses don't have to compete with adults who would prey on them, too

Octopuses can sometimes suffer from autophagy, or self-cannibalism. That is what is described as "eating its own arms." This is caused by stress. A stressed animal is not a healthy animal and is open to infection. It is believed that it is caused by a virus/bacteria which can manage to take hold on a stressed octopus. The biting is said to be due to irritation and biting alleviates the affected area. An octopus can lose an arm without harm and regrow it. By biting it off, the octopus loses the infected arm and hopefully a healthy one regrows, but in captive situations, probably caused by bad water quality, the infection can't be shaken off. The stressed, infected octopus dies with its arms in tatters. Ever see a dog that constantly licks its paws to the point of bleeding? Again caused by a secondary infection and even after the infection is gone, a dog may keep the habit. Seemingly hurting itself on purpose, but really just responding to a given situation, is called habituation.

It is purely bad handling and bad husbandry that causes this. A healthy octopus would never do this in optimum conditions like in its natural environment. Some animals can become stressed or bored to the extent of self-mutilation. Some parrots, again an "intelligent" animal, will pluck all its own feathers out. This is very common in captive birds. It can be cured by stimulation. Give it toys, some company, a more natural aviary and it soon stops.

Animals can often suffer from repetitive stress syndrome, pacing backwards and forwards in their enclosures like an elephant in a concrete zoo cage. Or monkeys used for dancing will often be seen biting themselves. This is why many zoos now encourage "enrichment." They try to encourage near-natural conditions by hiding animals' food inside tree stumps, for instance. This would be suitable for an animal such as a coati mundi, which would normally look for its food in this way.

Anyway, all this is caused by humans and their intentions, like the experiments with octopuses that Richard Ellis describes in Monsters of the Sea. (He describes an octopus biting itself until it died, following experiments involving shock treatments.) Lack of enrichment in its lifestyle and probably poor water quality, maybe it was in a bare tank - ALL could have caused this autophagy. What were the experiments? They could have been zapping it with electric shocks to "see" what would happen next, as is sometimes done. So, animals DO NOT commit suicide but some external, alien, stimuli can cause uncharacteristic behavior. I believe that is what was witnessed here with a "suicidal" octopus.

In an article by J.B. Wood and D.A. Wood, Enrichment for an Advanced Invertebrate, something happens while breeding Octopus briareus that they call "suicide." The baby octopuses climbed out of the water onto the side of their sterile rearing chambers and apparently committed suicide. Their dried-up bodies were found clinging to the sides of their chambers. When some cork and accordion-folded strips of plastic were added to the rearing chambers, the octopuses took refuge under them and the "suicides" stopped. Again, enrichment solved the problem. Allowing an animal to behave like an animal goes a long way.

So, in answer to your question, in my opinion animals do not commit suicide. It only appears to us that certain animal deaths are a form of suicide. Their deaths are actually due to other causes.

I'd welcome additional comments, if anyone wants to agree, disagree, or just add something -- let's discuss on the Octopus Care forum on the forum.

Reactions: qiazopus and TeaMerchant
About the Author
C
Colin
Colin is a Countryside Ranger with a background in Applied Biological Sciences and joined the TONMO.com staff in March 2002. Based in one of the UK's largest country parks he is responsible for the care, conservation and management of many natural waterways, woodlands, bogs and forests across Lanarkshire. He is a published author on cephalopods and experienced in keeping them in the home; this includes cuttlefish and octopuses, and has advanced diplomas in both ‘Fish Biology & Fish Health’ and ‘Water Quality & Filtration’. Colin is a licensed amphibian worker and currently lives just South of Glasgow, Scotland.
Share:
Facebook Twitter Reddit Pinterest Email Share Link