I've always loved O's and reading on corals, I ran across a recommendation for an Octopus for this site. Out of curiosity I registered of course .

At this time, I plan to set up a coral tank but I am very very tempted to switch directions 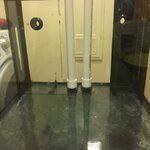 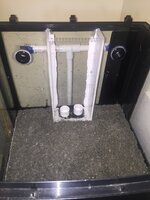 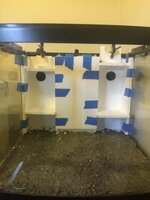 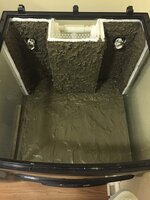 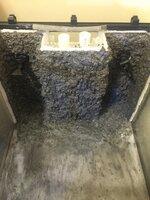 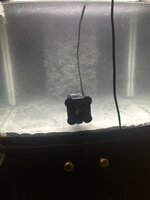 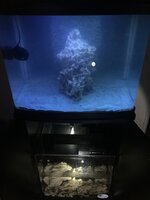 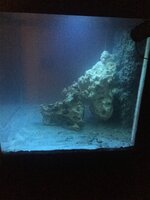 BTW, does this site sell Octos?
Thanks for looking

Welcome. Looks great. Love the back wall removed. I did that once my self when I used a BC29 for a fug.
No the site does not sell octos but there are links here to help you.

Ty for the welcome and the info. Where does the site have links for them?

Went to a new LFS I've never been to before and what did I see?
2 Octos they have had for 2 months

They seemed healthy and the owner fed them for me. Owner said one was a mimic and the other a joubini. I doubt its a Joubini since they are found in deeper waters vs. mercs.

I will say it's a Merc, he is about 3-4" and quite possibly towards the end of his/her life span but I wanted to get my hands wet with an Octopus.

Currently she/he is in a 10gl qt tank and hopefully he will last long enough for the B29 cycle.

Acclimation Process-
Float bag for 25min
Open bag, remove a cup of water for param testing
Set up a 7' latter and placed a gallon of tank water in it about 3' above the tank
Air line with a knot so I had about 1-2 drops per second.
Tied the top of the bag with a rubber band and air line going down the center (Keeps water @ temp and prevents an Octo escape)

My biggest worry was the 1/8 cut out for the aquaclear 70. sponges fixed that but where the AC overflow is where I was stumped. Then I had an idea that I believe made my tank Octo proof!
I will post a picture when I get home but will describe how I did it.

I took a zip lock bag and removed the seal. Using the food safe plastic, I opened the seams to 2/3 remaining seams once the zip section gone (should fold over).
The tops of the QT tank is glass and has a plastic connection where you can cut out specific areas. Here is where I placed the zip lock bag between and it came up where the overflow and cut out meet. I then removed the lid of the AC so the zip lock bag covered half of the top. Made a hole just enough to place the zip lock bag over the AC flow adjuster, placed AC top over zip lock bag. Lastly... I used 2.5" wide tape and as tight as possible, I wrapped the AC so the tape overlaps to get a nice tight hold on the back of the AC (driest part/least amount of moisture).

If you follow, I used the ziplock bag to shield the the escape route to land while securing the sides.

Finally, the AC has 2 chambers. impeller and media chamber. I don't mind if he goes to the media chamber but the impeller section worries me. For now I placed a sponge that has good flow but I will go the an Arts n Craft store and buy one of the plastic sewing mesh things (no idea what its called but used it in the concrete build). 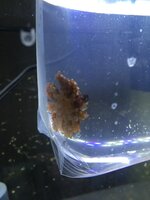 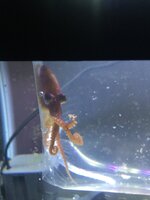 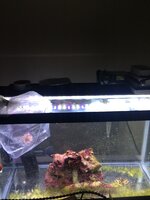 @DWhatley, shall we move this to a new thread under journals?
Last edited: Nov 22, 2016

Awfully cute guys you have!

@West1 Have you named your little guy yet? Hopefully you will continue to journal this adventure so a move to the journals thread will help others (and you later) find it. I can move it as is but it is helpful if I have a name

Tyvm for the warm welcome!


DWhatley said:
@West1 Have you named your little guy yet? Hopefully you will continue to journal this adventure so a move to the journals thread will help others (and you later) find it. I can move it as is but it is helpful if I have a name
Click to expand...

I have not given it a name yet. It would have to be something like Houdini or something close since it stays hidden all day so far

Yesterday I went to the lfs to buy some type of food just to beef him/her up before trying to get on non live foods. Walked in the door, set my keys down and straight for the tank... No octopus.
Walked darn near around the tank as I stare closely between rocks, nothing. Looked in the filter, nothing. Looked around the tank for possible evidence of an escape, nothing. I am stumped at this point but tossed in the red claw mini hermit crabs anyways... then BOOM, an arm pops out from the very bottom of the tank and grabs a hermit. It was like a movie, no body just a long lanky arm as it drags its dinner back under the liverock.

I will try and remember to take a picture of the filter just incase its a successful diy mod.

I just hope this little guy/gal will not be a rock and just stay hidden 24/7. I am an early riser for work so I checked on the [email protected] just before heading to work, no signs of a curious Octo. The important thing is that its eating, alive and being cared for to the best of my ability.

Mercs are typically quite recluse but will learn a regular feeding time. A trick for a merc house (and it has worked for at least one other dwarf/small octo) is to find a cluster of giant purple barnacles (no varnish!). Set the cluster so that an octo sized opening is about 1/3 of the way up the tank (I have both embedded small clusters and used larger ones that meet this height suggestion). Females seem to gravitate to them within 24 hours and stay denned. Males will move about but still use one or more much of the time.

Thx, I will look into one.

This QT tank is starting to look like a display tank

One other note and I will confirm when I hear from the owner.
I was told he was offered about 60 eggs of dwarf cuttlefish. I forget the specific species. If he gets them, he will have them in the Los Angeles/310 area if anyone is interested.

*Covered the surrounding area with sponges.
*Ziplock bag between plastic and glass top. With ziplock bag going under the tops, place over the filter. *Creating a barrier for the overflow of the AC.
*Tightly placed tape around the filter so the tape overlaps (tape will not stick to the filter but will stick well amongst itself).
*placed a piece of tape over AC flow control just for peace of mind 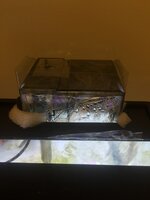 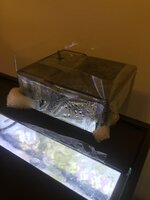 I need to redo the inside of the filter as I do not like how I have it. I'll update when I buy the mesh screen.

Congrats. Nice to see you found one. I am wondering if it is a merc? Being that your in socal. I am not the best at id'ing them and leave that to D. How long till the 29 is ready? The 10 is fine. I kept a merc in an 8 biocube. Thought I was doing that again when it turned out to be a vulgaris

sirreal said:
Congrats. Nice to see you found one. I am wondering if it is a merc? Being that your in socal. I am not the best at id'ing them and leave that to D. How long till the 29 is ready? The 10 is fine. I kept a merc in an 8 biocube. Thought I was doing that again when it turned out to be a vulgaris
Click to expand...

Hi and ty.
The 29 is still at the beginning stages of the cycle.
Ammonia 1ppm
Nitrite 0.00ppm
Nitrate 0.00ppm
It seems like my cycle is going very slow, it might not be ready this year which will be a bummer.
Not sure if it's a merc but im just assuming it is as it's the more common species of the pygmys.
Share:
Facebook Twitter Reddit Pinterest Email Share Link
Top