I placed a small order with KP Aquatics for some badly needed cleanup crew. Philipp called me and said they had just found an octopus in newly collected live rock and asked if I wanted to add that to my order

(yeah, that is a rhetorical question if I ever heard one ).

The FedEx clerk was excited when I told her I was picking up an octopus, she had just seen Finding Dory and loved the octopus. Since the nautilus is named Nemo (actually after the Captain of the Nautilus in 20,000 Leagues Under the Sea), Hank was the obvious name choice.

I prepped the 65 gallon tank but when Hank arrived he was just too small to go in that tank and ensure he was eating so I relocated the two friendly crabs that have been living there (there had been 2 blue crabs as well but one cannibalized the other last week so the cannibal was moved to another tank). The larger one was fairly easy to remove, the small very shy one was a PITA and took me an hour of blocking holes and encouraging pokes to succeed. Both went into the tank with the lobster and spadefish with hopes that they will be unmolested

I am not confident of his species and my first call may be wishful thinking. He appears to have an eyespot but it only shows as a brown circle. I have seen O. vulgaris described as "with or without ocelli" but the eyespot issue is still open as far as I know. Also, I cannot be sure it is not just a round marking on one side. The only known Caribbean octopus with an ocellus is O. hummelincki but the eyespot is blue and yellow. Monty (species never determined) was also Caribbean with a faint brown eyespot but I am sure Hank is not the same species. I've seen him/her (too young to tell) out exploring but he has refused pieces of shrimp and salmon. 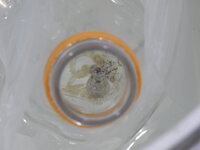 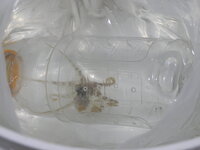 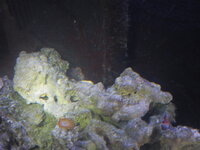 Acclimation Video - he was faster than many to leave the security of a bottle but still a bit of a slow process.

Hank blew the first-day food offering out of his rock observation point. I did not see him again until about 8:00 tonight (I looked frequently) when there was a slight color mismatch of the live rock in one of the rock's holes. If he had simply been his dark color, I would not have spotted him. He shied away from the feeding stick but I attached a small amount (about mantle size - he is tiny!) to the edge of the hole. Instead of blowing it away, he took it inside, wiggled around occasionally, changed colors for no apparent reason and stayed visible for about an hour. I believe he was dining.

The video is long and you might want to stop viewing after a few seconds as nothing significant happens but you can find his eye by looking for a white star. Full screen suggested.

Yes - exciting! D I forget, have you ever owned vulgaris? Hank looks great!!

Sadly, Hank did not make it. I alway fear the first 2 weeks. He likely died sometime Friday. I did not worry too much about him not being seen on Friday but looked extra hard last night and spotted him up inside the LR. Unfortunately, his color and movement (from the bristle worms) told the story.

@tonmo LittleBit, one of my favorite, was a female vulgaris and I was excited to keep another.

I understand, the early goings are perilous.

He/she was very young so the mortality rate increases but this was unexpected.

So sorry to hear about Hank. I know how bad you have wanted a vulgaris.
You must log in or register to reply here.