What follows is TONMO.com's exclusive interview conducted 2/3/02 with famed marine TONMO.com: You are known as both an artist and a leading historian of the ocean. What came first for you -- painting sea creatures, or writing about them?

Richard Ellis: As a child I always drew, and it was mostly animals, so I'd have to say it was drawing that came first. My first book was The Book of Sharks (1975), which came about because a publisher had seen the painting of a great white that I did for Peter Benchley. I then wrote the text and did the paintings and drawings for that book, and did the same for the next two, The Book of Whales (1980)and Dolphins and Porpoises (1982).

TONMO.com: In late December there was a widely-published report about the discovery of a mysterious deep sea squid, complete with dramatic video footage. (It seems scientists may have known about this creature for 10 years or more, but this was the first time valuable data (i.e., video footage) was culled for it). It has stringy legs, and broad fins adorning its mantle which it uses to propel itself -- and it seemed unphased by the bright lights of the submersible -- uncharacteristic for deep sea animals. What do you make of this thing -- and is this all just hype?

Richard Ellis: I don't think it's hype at all. The longer they waited, the better chance they had of actually getting a specimen. So far they haven't, but there's no question that they will eventually. I think it's amazing: there have been all sorts of "expeditions" to get footage of the giant squid Architeuthis, none of which succeeded, and out of the blue (as it were), there is footage of a mysterious, very large (23 feet total length) squid that nobody expected and until those videos began to appear, nobody had ever seen. I think it emphasizes how little we really know about the creatures of the depths. (The videos were shot at depths that range from 5,000 to 12,000 feet).

TONMO.com: In your book, Deep Atlantic, you cite the dramatic and sometimes perilous history of deep sea exploration. Growing up, I learned from a variety of outlets about manifest destiny ("go West, young man!") as well as space exploration and the study of our solar system. Why do you suppose there's a comparatively lesser focus on deep sea exploration?

Richard Ellis: Probably because it's so expensive. It costs a fortune to mount a deep-sea expedition. Most people tend to think of these expeditions as "bring the submersible to the site, lower away. film what's in front of you." Just renting the mother ship can run into tens of thousands of dollars, and then there's the support crew to worry about. And then there's always the possibility that weather will wash you out, or (more likely) that you won't be able to find what you're looking for. That's what's so surprising about the squid with the crooked arms: all the videos were shot while they were looking for something else.

TONMO.com: What are you working on these days?

Richard Ellis: I'm working on a book about the decline of the earth's marine resources for Island Press, to be published in 2003 [and to be called "Emptying the Ocean"], and also a study [a book, tentatively titled "An Extinction of Dragons"] of the extinct marine reptiles, the ichthyosaurs, plesiosaurs and mosasaurs, to be pulished by the University Press of Kansas, also in '03. Some of these marine reptiles were gigantic; the largest known ichthyosaur was 65 feet long, larger than a full-grown bull sperm whale.

TONMO.com: Regarding your study on earth's marine resources-- I read an article recently that said the last El Niño contributed significantly to the estimated 10% depletion of our coral reefs. Why is this so important?

Richard Ellis: It's actually a lot worse than that. Most people probably never heard of deep sea corals, that get along without the photosynthesizing bacteria (zooanxthellae) that give life to the better-known shallow water corals. These deep-water forms are being destroyed at a rate that boggles the mind. Every year, deep-water trawl nets destroy the life of an area equal to that of the continental United States. As for why this is "important," it's obvious that a species (us) that goes around destroying life on such an alarming scale is in deep trouble morally and ethically, not to mention environmentally.

TONMO.com: In your books and articles you've focused on dozens of different sea creatures; most notably sharks, whales, dolphins, and octopuses and squid. What marine animal do you find most interesting, and why?

Richard Ellis: I guess it depends on what I'm working on. When I was doing sharks, I guess it was the great white, so I wrote a book (with John McCosker) on that species. For whales and dolphins, I have no real favorites, but I kind of like sperm whales and killer whales, the former because they're so poorly understood, and the latter because they're so powerful and dominant. (Does that say something about me?) Then I wrote a chapter on the giant squid for Monsters of the Sea, and I was so intrigued by this critter that I wrote an entire book about Architeuthis. When I was working on the creatures of the depths for Deep Atlantic, I was particularly fascinated by the bioluminescent fishes, but everything that lives in that cold, dark world interested me. For Imagining Atlantis, I visited the sites of the ancient Minoan civilizations in the Aegean, but I've always been interested in how much Jules Verne got wrong. Then for Aquagenesis, I devoted much space to the evolution of whales, but the whole story of the evolution of those animals (manatees, whales, penguins, seals, sea lions) that are descended from land animals just blew me away. I guess I'm saying that it's really hard for me to pick out my "favorites."

TONMO.com: Have you corresponded lately with Dr. Clyde Roper, and are we any closer to being able to observe a living giant squid?

Richard Ellis: I think Roper has retired from his position at the Smithsonian, but that won't stop him from mounting expeditions. The existence of those videos of the mysterious squid with "elbows" will certainly encourage people to continue their quest for film of Architeuthis.

TONMO.com: Thanks very much for your time and for sharing your thoughts with us. Good luck with the books; we're looking forward to them! 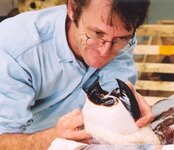