Before the mid eighteenth century the origin of fossils was generally regarded in terms of superstition and myth. Many differing accounts across different cultures explained how these fossils came to be and interesting folklore traditions developed regarding these stones. Frequently fossils were ascribed to have magical or medicinal properties. Here is a quick look at some of the better known and some of the more obscure folklore traditions regarding cephalopod fossils. Probably the most famous story about ammonites is the origin of their name. The distinctive coiling of the shell suggested to the ancient Greeks a resemblance to the coiled horns of the ram, they were regarded with special sacred significance due to the Ram-god Ammon who had been adopted from the earlier Egyptian oracle-god Amun. Specimens were known as Cornu Ammonis, or literally 'Horns of Ammon', eventually passing into scientific terminology as ammonites. In China, coiled cephalopods also tended to be compared with horns and were called Jiao-shih, or horn stones.

Certainly in England ammonites were frequently interpreted as being coiled snakes that had been turned to rock and had somehow lost their heads, and were often known as snakestones. Most of the legends surrounding snakestones centred around Whitby in Yorkshire. In 1586 William Camden in his Britannia recorded stones that 'if you break them you will find within stony serpents, wreathed up in circles, but generally without heads'. Sir Walter Scott records in his Marmion in 1808 the classic legend of how these snakestones came to be:

When Whitby's nuns exhalting told...,
...Of thousand snakes each one
Was changed into a coil of stone.
When holy Hilda pray'd:
Themselves, within their holy ground.
Their stony folds had often found.

St. Hilda was a Saxon abbess (614-680AD) and Queen of the ancient Saxon kingdom of Northumbria. Bede records that she hosted the Synod of Whitby, at which Celtic and Roman Christians met to decide on liturgical matters in 664, consequently she is an important character in the history of the early development of Christianity in Britain. Legend has it that she turned all the snakes to stone in Whitby in order to clear the ground for the building of a new convent. After a bout of devout praying the snakes coiled up, turned to stone and fell off the edge of the cliffs after she had cut their heads off with a whip. The absence of heads in these fossils is sometimes attributed to a further curse by St. Cuthbert. It has become a tradition in Whitby to carve snakeheads onto ammonites, this tradition has continued to the present day and these snakestones can frequently be found being sold by fossil dealers. Usually specimens of Hildoceras and Dactylioceras are used for this purpose, Hildocerasbeing named in honour of St. Hilda. Some of the Whitby specimens are preserved in jet, which has a beautiful appearance when carved and polished, certainly at least one example of a carved jet Whitby snakestone has been known from Norway, clearly traded or transported by Norse settlers. In Elizabethan England snakestone brooches of jet were highly prized.

Sometime in the sixteenth or seventeenth centuries the ammonite became a symbol of Whitby. Tradesmen's tokens bearing three ammonites within a shield design are recoded as far back as 1667 and in 1935 the ammonite was officially adopted onto the towns coat-of-arms where it still resides to the present day. These ammonites became known as the 'Arms of Whitby' and can be found on symbols of local heraldry. The local parish church, St. Hilda's (1888) has three ammonites on the pulpit borne in the arms of angels. Even the current Whitby football team, Whitby Town FC, has the ammonite design on its crest!


There are variations in the theme of the snakestone-ammonite legend in other parts of England. For example at Keynsham near Bristol the legend is attributed to St. Keyna as she turned all the snakes to stone in the local woodlands, ammonite fossils in the red sandstones in that area are not uncommon. A depiction of St. Keyne at Brecon cathedral in Wales depicts her surrounded by many snakes including one that looks very much like an ammonite. Similarly, at St. Keyne in Cornwall a depiction of her holding an ammonite can apparently be seen in one of the church windows. Elsewhere in southern England it was believed that these snakestones were once fairies '...once inhabitants of these parts, who for their crimes were changed, first into snakes, and then into stones'.

In parts of Scotland ammonites were once referred to as Crampstones and were given medicinal properties. M. Martin in his 1703 Description of the Western Island of Scotland recorded that 'These Stones are by the Natives called Crampstones, because they say cure the Cramp in Cows, by washing the part affected with Water in which this Stone has been steep'd for some Hours'. A similar tradition existed in Germany; Georg Henning Behrens described in 1703 how farmers from Gandersheim used as witchbane'... a fossile shaped like a Rams Horn call'd Drake (Dragon) stone...for when the Cows lose their milk, or void Blood instead of it, they put these Stones into the Milk-pail, and by that means expect a due quantity of Milk from the Cows again'.

Other parts of the world have legends involving ammonites too. It was popular belief in Greece that ammonites were a useful remedy to insomnia and it was believed that to put an ammonite under the pillow would help, in the words of a coin dated 480BC: 'The horn of Ammon which makes beautiful dreams'. These fossils were known as Ophites and were kept as charms, protection against snakebites and as a cure for impotence, blindness and barrenness. Australian aborigines often carry ammonites as they believe the fossils contain magic powers and frequently make them into amulets. In India they are often used to represent the God Vishnu in Hindu temples. Similarly, some Himalayan tribes had traditions of carrying ammonites up mountains to venerate them, these were known as "Wheels of God'.

In North America medicine men of the Navajo and other Plains Indians carried ammonites in their bags; these were known as wanisugna or 'life within seed, seed within shell'. The Blackfoot Indians called them iniskim or buffalo stones and were used in spiritual ceremonies prior to the hunting and corralling of bison herds. To the Blackfeet ammonites were especially favoured as journey stones, if one was found prior to setting out on a long journey it was seen to be good omen by the spirits for the journey ahead. Similarly in Ethiopia it was believed that possession of an ammonite would lead to prophetic dreams. In Viking period Scandinavia allegedly ammonites were regarded as sacred as they represented spawn of the World Serpent, slain by Thor's lightning bolts. Very rarely ammonites have been found in Anglo-Saxon graves in England with a hole bored into them and probably used as a pendant. There are fewer legends about nautiloid fossils than ammonites. In China orthoconic nautiloids were often referred to as Bao-ta-shih or Pagoda Stones due to a similarity in the tapering internal chambered structure to the outward appearance of a pagoda. On the island of Oland in the Baltic Sea off the coast of Sweden, straight nautiloid fossils were traditionally referred to as Olandsspikar, literally Oland spikes or Oland nails. These Ordovician period fossils were first recorded in 1741 by Linnaeus in the limestone deposits around Boda. Belemnites are traditionally associated with thunderstorms and have many differing traditional names usually along the lines of thunderbolts, thunder-arrows or thunderstones. It was common folklore throughout Europe that these cylindrical bullet shaped fossils were cast down from the heavens as lightning, hit the ground and turned to stone. If one was struck by lightning it was believed that one had been struck with a thunderbolt. This belief was probably heightened by the unusual translucent quality of belemnite fossils; they are frequently preserved in a pale yellowish-brown colour, possibly reminiscent of a lightning flash. The word belemnon stems from the Greek and literally means dart. In Russia belemnites are referred to as thunder-arrows, or gromovye strelki. Similarly in Lithuanian mythology belemnites are referred to as Pekuno akmu or Pekunas' stone, Pekunas being the Thunder God and often compared to the Norse god Thor. It was also a traditional Germanic belief that to keep these thunderstones at home would afford the owners home from protection from lightning, in parts of the Netherlands these donderstenen (Donar's stones, Donar being the Thunder god) were kept in the roof.

Like the ammonite the belemnite was believed to have magical healing properties. In Lithuania a traditional magic charm reveals the method to treat a snakebite, by rubbing a belemnite over the wound whilst uttering the words:

In parts of western Scotland they were known as Bat Stones and were put in water fed to horses to cure them from distemper. Similarly in Southern England it was widely believed that belemnites could be used to cure rheumatism and sore eyes in both men and horses, the treatment of which was to grind the fossil into powder and produce a dust that would be blown into the eyes. Ammonites: Myths and Legends:
Myths and legends about ammonites

Thanks to Craig James at Whitby Town Football Club. Good luck for the season! http://www.whitbytownfc.co.uk/

Thanks to Jean Mckinnon for the Journey stone image.

Pagoda image with the permission of the Trustees of the Royal Botanic Gardens, Kew.

Orthoceras from authors' own collection.

Although the majority of the information in this article was taken from Michael Bassetts' book, further information has been compiled from numerous websites. I apologise to anyone if I have left their website out of the references and acknowledgements. 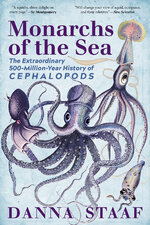 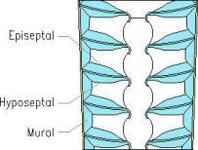 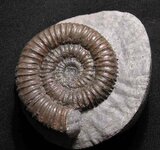