half of the eye lens: Growth Rings around the eye lens... back to the freezer it goes! Dr. Kat asks for a scalpel!

That idea about the photophores being used for countershading.... Amazing thought EDIT: Following is apparently not true! Seeking details though on the 770lb squid that WAS dissected: GREAT SCREEN CAPTURES! Sorry I missed the live chat but ended up having to watch while making supper, eating and installing microwave. I would have put the first two on hold but they needed to be completed before the third could take place and I could not stand one more day using the tiny counter top model we brought up from the bar when the primary died on Saturday. We found a replacement on Sunday but it was too late to install it last night. My 7" screen Blackberry lives in the kitchen, is fine for watching YouTube, could be moved to the table but it is not practical to use for trying to use the forum. Life is now back to normal with no additional system failures

Those tubercules you mentioned, Kat, are they the really tiny denticles we noticed last time, say not more than a millimeter or two in length, or larger wartlike structures? I missed the ML, for some reason, just curious...

DWhatley said:
I think the NGO photos in #29 are the 2007 animal and not the latest one
Click to expand...

I thought I heard one of them reference the 2007 specimen during the event as being the one they were working on... what is the latest one? Is there an article about its capture anywhere?

I didn't find anything about the capture but did find this article from August 11 that give a little bit of info and mentions that it was caught in the summer of 2014.

This article and the included photo of Capt. John Bennett and the squid on the boat suggest that the Squid was caught in December 2013 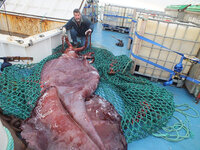 Hi gang! Wow, awesome screen captures--thanks for posting! This was a truly amazing event, in itself from a scientific standpoint of course, but also from the community/public interest perspective. People LOVE big squid (why shouldn't they)... on some level we know this but it is still incredible to see the numbers of participants continue to rise by the hour!

So this makes four specimens in total that have been examined at Te Papa. One in 2003 (the very first, from a lot of the photos with Steve looking at hooks, beaks etc); two in 2008, when OB was also part of the examination team (one very damaged one and the good one that is now on display at Te Papa); and this one. Various sources have said that this was only the first, or second, but perhaps they just meant intact (which is true).

OB, did we see the denticles before? I've forgotten if so. Aaron saved a piece of the skin specifically to SEM though so maybe it will stick with me this time They were just a very slight texturing in the skin that you could only see from a certain angle/lighting.

Time to update the colossal fact sheet!
You must log in or register to reply here.

Welcome to Adventures with ALCES!