I visit our local (30 miles away) H Mart from time to time for fresh fruit, small steaks and baby back ribs. When I have an octopus in residence, I am a more frequent visitor because it is my only supplier of blue crab claws. I have gone to several H-Marts (as well as a couple of other Korean markets) and, in all the years shopping there, I have never seen even a suggestion of live octopus (I do have a couple of successful abalone and I have seen but never considered geoduck for the cold tank). On Tuesday, I made the long grocery trip and discovered that, not only had they completely redone their live fish tanks but that they were advertising live octopuses, sea cucumbers and sea squirts for the months of July and August (my "local" store only). Fortunately for the animals, only a couple of scrawny cucs were in the tanks.

I inquired (of course) and was told "tomorrow" by the non-English speaking fish counter man. I did a lot of useless hand gestures and tried to communicate that I wanted to know about "live" only (they also carry frozen) and that I wanted them for an aquarium. "Tomorrow", he said. When? "afternoon". Live octopus, right? "Yes, tomorrow they come by plane".

I was not convinced I was getting valid intel but today, I called and confirmed that there should be live octos there, later. I tried using Google translate over the phone but it failed to deliver my message. So I just asked, "when?" receiving "maybe 5:00 PM" as my answer. At 4:30 I called and they confirmed they had them. I loaded photos of my fish tanks (including several with octopuses in residence and one with the abalone I had purchased there over a year ago), set Google Translate to have Korean as the on-board language and headed south. In the parking lot I considered grabbing one of the teens that likely spoke both Korean and English but decided they might think me a bit too crazy to help.

To my surprise, when I approached the fish market, there were, indeed a tank containing live octopuses. By now the fish mongers recognize me and grinned widely when I approached the tank. I was not allowed to choose my octo but I was not going to push that. I DID have to argue that I needed water to carry them home. I must have intrigued the manager because he came out to help me a bit and found a plastic scallop bucket for my prizes. I did show my photos around a bit, explained about the abalone still being alive after over a year (I have lost a few but I thinks this pair is actually about 2 years in the tank) and did use Google Translate to get the tank temperature.

I don't expect Thing 1 to survive even 24 hours but have a bit of hope for Thing 2. As you can see in the pictures, Thing 1 barely colored up at all and remains very lethargic with heavy breathing. Thing 2 is not active but his color and breathing improved dramatically with some tank water and oxygenation. 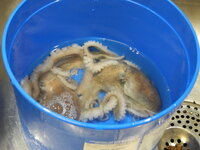 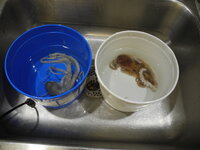 Thing 2 was place in the cold water tank (about 69 degrees) but Thing 1 will go into a warm water tank. I had planned to try this from the start to see which temp worked better but had hoped for animals in equal health. 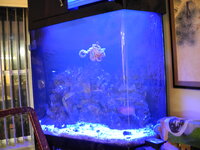 I also got a huge cucumber and a sea squirt (Halocynthia roretzi). The sea squirt is an aquacultured species and may do well in the cold tank if up rooting it does not kill it. So far the cuc seems to know he is in a new place and has been crawling all over/under/around the entire tank. 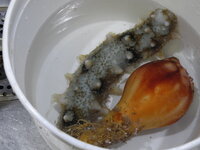 OH! I was able to easily find the species this go round. Anyone that remember's @davelin315 's 2014 thread knows that trying to properly ID the "Common" Korean octopus was not an easy task. My attempt today only took a couple of misses before finding a nice match on Wikipedia. Finding info on keeping them, however, is still slim but I did find a few hints on Sealifebase

Sadly, as expected Thing1 did not survive a full 24 hours. Her color was much improved after I released Thing2 but her breathing was very labored, her entire mantle would collapse and expand with each breath and her siphon was oddly fully extended at all times. I almost did not place her in a tank but ultimately chose one of the smaller tanks, expecting to have to remove her. She extended her arms and took a place on the wall without showing the curly cue arms but a few hours later, I found in the substrate on the other side of the tank.

Thing2 moved fully across the tank and then back before I came up to my office. When I checked on him around 4:00 AM he was well hidden in the live rock but alive. We will see what the morning brings.

Thing2 has not come out since he disappeared into the live rock but I know about where he is hiding as I can see a row of suckers if I hold a flashlight just right, put on some magnifying glasses and stand on my ladder

. Earlier, there appeared to be pinkish tips on the suckers, suggesting he was alive. Around 11:00 PM I checked on him again (now the tank is fully dark) and the suckers appeared fully white (but not grey) and I wanted to know if he was still alive. It would be quite difficult to try to remove him if he has died and I will probably have to let him decompose. Fortunately, this is a 140 gallon tank with very little living in it. The new sea squirt and cucumber were added to a an urchin, a hermit, a mithrix crab and the pair of abalone. I believe all the other residence can take the decomposition if I change out water for a few days.

I am getting ahead of myself though. I managed to put the back end of a cleaning tool into the viewing hole and lightly touch the arm (at least I think I touched it). There was a little but definited movement of suckers that continued for a minute or so after I removed the "stick". I would have liked to see more movement and coloration but at least I know it is still alive.

Thing2 refusing a piece of shrimp

I really hope you succeed with Number 2, D. You went to a lot of effort to buy this octopus. It was interesting to see your sea cucumber, too.

I don't have a lot of hope for Thing2 but I have wanted to try this for many years. The trip was probably worth it for the cuc and sea squirt.

Thing2 is still with me but I only know that by taking a flashlight to the rocks and finding an arm everyday. He has moved to three different locations (maybe because I hunt him with a flashlight

I am not sure if he has eaten anything. I offered thawed rock crab on day one and know that he ignored one of them but the other was taken under the mantle and disappeared. He did dig a hole in the sand when offered the second, rejected crab so he may have buried the first. Last night I dropped a raw clam into his hiding area and saw a lot of arm movement for several minutes afterwards but have no way of knowing if the offering was eaten of considered a threat. I will try offering another crab to his new location tomorrow.

Thing2 is still alive and does move around the tank a bit. Today I saw an arm sticking up along the back wall (vs other sightings where he was fully hidden in the live rock). I took a flash photo and then tried offering another clam (I bought several at the Asian market. Three died after a day and I saved the meat). He did not take the offering from the stick but I dropped it on top of him and hoped for the best. There was, again, clear arm movement but then he moved to a new location so I don't think he ate. I will try a thawed shore crab tonight. 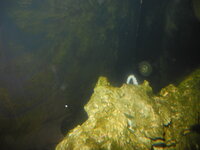 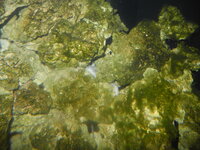 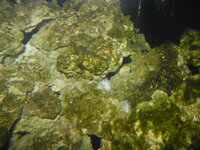 Wow, I am just catching this thread, what a story! Nice work, D.

Sorry about Thing 1... Hoping to see pics of Thing 2 in full glory soon.

Sadly, I don't expect Thing2 to make it through tomorrow. Tonight he came out and wandered to the front of the tank but was pretty listless. He was not interested in the crab I offered (dropped on his arm and he let it sit there, unnoticed). He maneuvered over to the abalone (possibly because of the seaweed they were eating), crossed the tank, swam a little then returned to the abalone corner and is now looking crumpled and sad (still breathing but laboring). 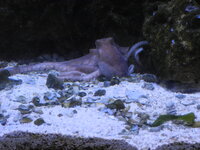 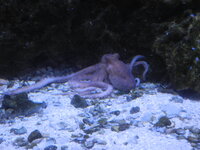 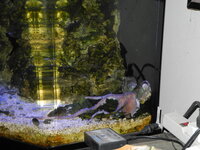 sorry D. Appreciate you taking this from supermarket to home! Any ideas what went wrong?

I checked on Thing2 throughout most of the night. At about 6:30 AM he had passed away. I won't say anything "went wrong" because trying this with even a tiny amount of hope for success requires an extremely robust individual animal AND a lot of luck. The conditions of their shipping (excessively cold water and overcrowded, unaerated containers), leaves little hope for success. I knew this going in but have to admit to a bit of hope when Thing2 colored up so much better than Thing1 and that I had picked them up on the day they were flown into the facility. I am not sure if I will try again but my experiment with the abalone took a couple of tries so I may try to find out when their next shipment is expected.

Got it. Thanks for documenting the experience and taking it on!

A good first try, D. What would you do differently the next time?

Sadly, I don't know. My only thought is to try to get one of the smallest animals (with the hope it means younger -- something we know is not guaranteed) to see if it might be slightly more robust than an adult.
You must log in or register to reply here.