Say hello to Sylvester He is another octopus from my seafood supplier friend who ended up in my tank instead of in someone's kitchen. Again, I wasn't expecting a new octo. But this time, my tank was ready (albeit, still small) and hopefully, I'm more ready too.

Today is Day 4 and he seems to be settling in nicely. I wanted to make sure he survived the first few days before I posted.

He mostly hid on Day 1. But he surprised me by being out and swimming around by Day 2. He accepted a frozen shrimp! By Day 3, he may have somehow lodged out Crocodile Cove (or I didn't pin it down as good as I thought), so I've removed that. I didn't want to stress him too soon with my arm poking around inside the tank.

He doesn't seem to be scared of my hand, or maybe it's because I have pale skin - but he doesn't react when my hand goes near the glass. He does however change colors when I'm holding the phone (which is black) to take photos. He does this gorgeous black coloration with a white stripe in the middle- which wanted me to name him Pepe Le Pew, but it evolved and we settled with Sylvester.

His arms are long! Longer than Seven's. The longest one is at a little over a foot long I think. Hopefully I'll have a chance to have a more accurate measurement of his mantle and arms in the next few days.

Can anyone help ID?

Here are some pics from Day 2. 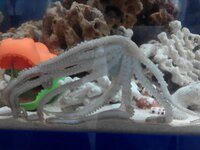 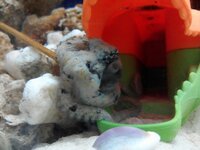 His "skunk" color when the phone goes near. 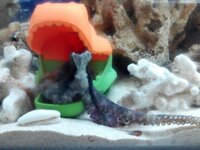 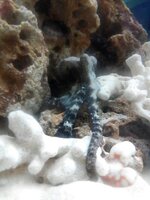 The first image looks very much like Abdopus aculeatus. Of the animals we typically see, this would be my best species guess but there are in the Abdopus family (some likely not named yet) that may look similar. As with your first group, one thing that suggests the possibility of something different is the failure over long observation to see little branching horns above the eyes.

Are these horns? Or texture? Camouflage that looks like texture? 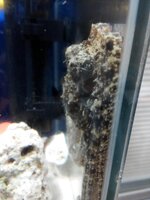 One thing that I noticed Sylvester has different from Seven is his webbing (is that what it's called? - in between arms?). Sylvester's looks wider and more transparent. But then, Sylv's resting color is much more pale than Seven's, a more sandy color with a hint of yellowish/greenish hue. I'll dust off the camera tonight, and hopefully I can get better pics soon. Very excited with the new guy!

The little spikey flesh in the photo is a common ID help along with the starburst pattern around the eye but are not definitive. Also watch for multi-branching spikes to show up above the eyes. Arm thickness, color variations and extent of webbing have varied a lot with the animals we have classified as aculeatus. So much so that I have little confidence in the exact species but feel relatively sure that they have all belonged to the Abdopus genus. Here is a collection of photos from Dr. Caldwell (@Neogonodactylus) identified as aculeatus.

This was taken a little after I fed Sylvester a shrimp. He ate a portion of it, and threw out part of it, and was 'posing' (he has a favorite pose in a favorite spot) when one of the snails, I assume, smelled the uneaten shrimp and came out. Whooosh! Sylv immediately went on the grab him. Unfortunately, I only got the tail end of it in video. He let go of the snail after a bit and went off to a rock.


Surprisingly, the snail was alive, and buried himself in the sand after. I think it was more "it moved, therefore it's annoying" rather than hunger, as he had just eaten barely 10 minutes prior.

Snails seem to be often attacked and assumed eaten but I don't think many are consumed. I was sure LittleBit (vulgaris) had eaten a large snail that she attacked, removed from the wall and kept under her webbing for quite some time. The next day the snail was back on the wall. I have not seen reports of snails being drilled or their shells cracked.

D, Sylvester seems to like being contradictory too. I woke up to an empty snail shell this morning.

LOL, as you might guess, I have learned never to say never and try to always couch behavior comments with words like, often, generally, commonly ... If octopus behavior was easily predictable, they would probably be less interesting

And I found the second empty snail shell. And just to prove his point, Sylvester made sure to leave it right smack in the middle of the front of the tank where I would see it.

I'm gonna need more snails
You must log in or register to reply here.