I'm posting on here again after I received great information months ago on our last Octopus. Our previous one, Octo, never really thrived or are and sadly died after just two months. We got another one some time after. He was bought as a Caribbean octopus. This one has been the complete opposite of Octo. His name is Inky! He has gone above thriving! He's been the perfect Octopus!!

I say he, but my question pertains more towards this one being female. We never were able to identify if there was one leg with no suction cups on the end. Inky's behavior has been the same since we've had him since the end of April. There's been no changes in the tank or tank mates.

Suddenly, the past week, Inky has become obsessed with making a den. He completely rearranged everything. Took rocks from all over the tank, shells with snails and hermits still in there, even a decoration of a turtle, and used them to build a den. Inky used to come right up to me or come out and chase me around the tank. Now, when Inky sees me looking in the little hole, he moves the rocks around to cover the opening or shoots sand out!

This one is so clever, that when I realized I could see him underneath the tank since he dug in the sand so deep, he started moving little bits of sand underneath him to create a thin layer to block my view! Is this nesting behavior!!? Is he a she!? Does this mean we are entering the senescence period? Inky hasn't eaten since as far as we can tell. Used to eat two crayfish a day. Our last Octopus was different species and more than likely male as he had classic senesence symptoms of males (sadly autophagy too).

It was hard watching the last one go. Brutal. We want to prepare ourselves. Does an infertile female actually lay eggs?? Will we have to deal with that when it happens? I haven't found a clear answer on that. We arent sure if eggs will be coming or not.

I just need some help on what to expect next. I appreciate any information given!! So grateful this site exists!!!! Thank you!!!

Sadly, you are observing classic brooding behavior. IF (photos can help to identify) she is an O. briareus (Common Caribbean Octopus), her eggs, if fertile (yes, they will lay infertile eggs) you can attempt to raise a few of the hatchlings. It is not for everyone and the results are rarely successful but it is sometimes doable.

Here is Kooah's journal. It will take you through my experience. Feel free to skip ahead to her eggs.

Here is @TheKraken'sMom journal of her current hatchlings. Unfortunately, these are small egg octos and we have not cracked pelagic to benthic mortality for the hatchlings that live the first month of their lives in the water column.
Last edited: Aug 25, 2016

Thank you for the information. We've had Inky since mid April, so I would think she is infertile. Do they know how long it takes once they mate until they lay the eggs? Today, thanks to leaving the red light on for a little bit I was able to look under the tank at her spot and found the eggs! I don't see anything in them.

Now we need to know what the heck do we do!!!? Is this the end? How long will she survive once laying eggs? Should we remove them? Do we leave them? We are in unfamiliar territory here. Any advice would be greatly appreciated!!! I'll add another post with pictures of Inky, see if it can help attain a positive ID.

As I said earlier, we bought her as a Caribbean Octopus, possibly O. briareus. However, after looking through some journals, specifically Diablo's, I think Inky is an aculeatus. Oddly enough, they even have the same pattern of "polka dots", Inky does that one often. 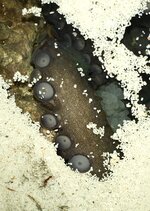 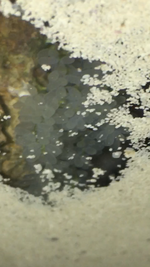 Here are some pictures of Inky in her prime =[ Have no concern about the appearence of a Green Wolf Eel (who's really orange) - they are the best of friends! Inky likes stroking him with his tentacles, and the eel loves it. Sometimes Inky would have to hide just to get some alone time from him, the eel LOVED him. They would sleep together sometimes.... it was so cute! We will miss him if this is it. 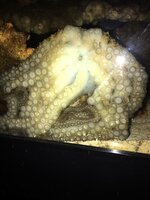 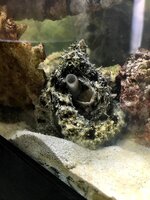 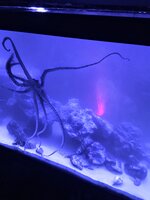 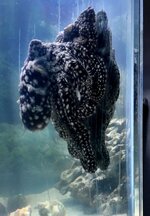 Definitely not O. briareus and I suspect aculeatus is a good guess, so not Caribbean.

I can't magnify the pictures but it looks like there are black spots on some of the eggs. If so, these would be eyes beginning to form. Females can mate at anytime but sperm is thought to be viable for only about 4 months (give or take so it is possible these are fertile, barely). Egg laying has more to do with the females body than anything to do with when she mates. She will store the sperm until she is ready to lay eggs and then fertilize them at that time. Unfortunately, aculeatus is a small egg species so you are likely to see the eggs hatch (roughly 2 weeks from being laid - give or take a week

). I suggest letting nature take its course and attempting to photograph the eggs every couple of days. Sadly, Inky will die shortly after the eggs hatch/should have hatched so keep an eye on her so as not to foul the tank. Often the female will come out of the den on her last day and wander aimlessly but this is not always the case.

You should know within a week if at least some of the eggs are viable (with the time passage since possible mating, I suspect only a few, if any, will be fertile). You may want to follow @TheKraken'sMom 's journal to see what kind of success she is having and have a feel for what to expect if you do have hatchlings.

I've been able to take further pictures and I'm almost positive I don't see anything. But I think that is a good idea to do as you say and keep taking pictures each day to note any differences. I'm sad this is the end. Inky's been incredible and something that kept us glued to the tank.

Thank you so much for the help!!!

Actually, just to clarify on the species, how do you know? I saw pictures of other Aculeatus and compared and noted the similarities. But is there more to it than just looks? He seems quite large, and I've seen others look pretty small although the markings they have are identical in some pictures. What exactly is the difference between the two, o briareus and aculeatus? Thanks!

You are not mistaken by noticing that many octopuses can look like a variety of species at any given moment and that it usually takes a series of pictures to have a good species guess. Many octopuses cannot be identified easily (or at all) with just a visual and need a necropsy (animal autopsy) to determine species but there are some general characteristics that we look for to pronounce a good guess among the most common kept in aquariums. In this case, color and skin texture eliminate O. briareus (one of the more easily identifiable animals) completely. The other Caribbean octopus that would get this large (again, noting common) is O. vulgaris but the eyes, arm to mantle ratio and textures suggest aculeatus. O. vulgaris has a thick mantle (the bag that contains the organs, often confused with a head), lower set eyes and shorter arms. The very long, thin arms, star around the eye and skin texture suggest aculeatus.

El Diablo's journal has many nice photos of a typical O. vulgaris. I did not feel comfortable with LittleBit's ID for a L o n g time as she was small for O. vulgaris and the juvenile animals are even harder to ID.
O. briareus displays only white and a peachy brown. It has very small papillae (skin bumps) and extensive webbing (not always visible but usually detectable) that can be opened to include a fairly large rock/coral. There are images of O. vulgaris that look like briareus but not visa versa. Here is a video and some stills of a 5.5 month old briareus catching a crab and here is a better video of the different looks and webbing -- a fun wayback journey for me as she was tank hatched. ). Note the peach color, lack of strong papillae and webbing. To compensate for their lack of colors, they also have green fluorescing/reflecting speckles that allow divers to see them at night with their flashlights.

For a couple of species, the color at the tips of the suckers can help tell them apart. Often the Caribbean O. hummelincki is labled O. bimaculoides. The hummelincki has purple-blue sucker rims where a bimac's are orange. Aculeatus has purple-blue rims (look for them in your photo - they are visible).

I gave a talk some years ago on ways to help ID some of the more common animals. You can view the outline and image here. Click on the intro picture then slide the left slider for topics. Click on any of the red writing to go to the page.
Last edited: Aug 26, 2016