Posted on here a little while ago about our amazing Inky (abdopus definitely, aculeatus maybe) and before that about our first octopus, Octo. Thank god for this website!!!! It is so hard to find any information on Octopus, which I can't even believe in this day and age! Thank you in advance for the help!!

Inky passed away about a month ago. Held on incredibly long after laying eggs. Almost two full months after. Quite the fighter. We realized that we wanted another abdopus without a doubt and our LFS told us they had a Caribbean Reef Octopus. This is what they had sold Inky to us as. My boyfriend and I both know that the names the fish stores give are useless. He has been hoping for Briareus. The typical species they show when googling Caribbean Reef Octopus.

He took the Octopus and brought him home when I saw him I knew right away he definitely wasn't abdopus, and I just can't make a positive ID. The LFS say they just go by what the wholesaler tells them it is and we understand. I've gone through numerous threads on this site and it's half a dozen either way. This guy is small. MUCH smaller than Inky was. Inky we know for sure was an abdopus something. It's just those small characteristics that are spot on with the species. However, the aculeatus has this pointy end to his head in almost every picture or video I've seen. Inky had a full head, not really round, but full, not pointy! That's enough on him!

This one is not as easy was my point. I've seen him shine a bright greenish color, similar to that of some briareus. However, he is very, very small. His legs are usually curled up but they just don't seem that long compared to his head. His resting color can vary, we do have a lot of purple rocks in our tank. While Inky would be a dozen different colors in a minute and another dozen different textures, this guy doesn't seem to have as much variety.

We have seen NO texture changes. He seems to have this constant sandy texture to him. Almost like a nail file or sand paper. Eyes are definitely prominent and round. Tire like. Usually, he's a reddish-brown, or a real deep red. I've seen him lighten up to a bluish white. Last night was the first time he really came out and moved about. I believe he was looking for food. He at one point seemed almost to have a marble pattern (picture attached) but then would go back to the dark red/brown. The way he changes is just so different from Inky.

Our first Octopus we never identified the species. From day one he wouldn't eat. He slowly starved and went through senescence. He changed color maybe a week so we don't really know species traits except for in the abdopus family. He seems to come out during day, not at night. Yesterday, light was on day and he was all over the glass. Didn't seem scared at all. Kept his eye on me. His legs curl but not corkscrew. His behavior was not that of senescence. He had a purpose, he wasn't just going up and down or playing.

He has a den he seems to like and a rock he will also hide in. He's grabbed some shells for his den. We got a crayfish for him and to our shock he ate the whole thing. It was almost his whole size!!! We did not see it go down. We see some webbing. Haven't seen any parachute type of webbing though. He seems like a sweetheart. We just don't know if he is a dwarf species of some kind. A baby briareus which I doubt but my boyfriend is giddy for.

Some possibilities I came to when looking through old threads, excuse the spellings, were maricopus, boki? bocki?, briareus, Beldar's Picture.

Sorry to ramble on. Any help would be so appreciated!!! Thank you!!!!! 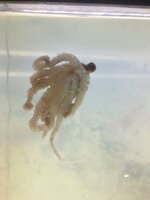 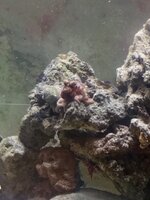 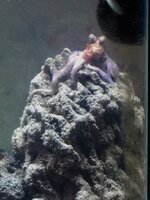 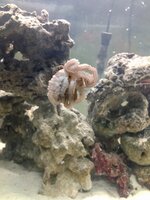 Years ago I set a mental goal to try to develop something to ID octos. The more I learn and the more photos I see, I understand why no simple diagnostic exists. Many species can resemble another at given instances (ie a photograph). Some of the in situ videos are helpful for some species because the animal may, over a period of time, display one of its most identifying characteristics (ex: white circles on the arms and a dark eyespot for Cyanea - without the display, it looks a lot like vulgaris). Most often it is easier to eliminate certain species but exact ID can be impossible. Some of the Abdopus genus have not even been described and possibly may only separated through invasive procedures after death.

That being said, for the hobby, we tend to see many of the same species and can often get close enough to point to a few journals to help a keeper know what to expect.
Upvote 0

@Jenelle - Thank YOU for contributing! Your insights are now part of the awesome TONMO knowledge base.

Upvote 0
You must log in or register to reply here.

P
Who can Identify?
2