I have often thought that our languishing 140 would be ideal for cuttlefish but did not want to go through the hassle and expense of raising new hatchlings. Several weeks ago I spent some time cleaning up the pentagon tank in the dining room but with no real intent. Being cephless for several months (longer than at any time since I have kept them), not finding an animal I was comfortable buying and a post in the availability thread sent me down a path of no return and my 6 cuttle eggs were delivered today from Blue Zoo Aquatics.

I contacted @Bret Grasse MBA for instructions on his soda bottle bubbler but thought my eggs would likely be closer to hatching than the time when it would be helpful. However, when the eggs came, they were still very opaque so I decided they may fare best if tumbled for awhile. I did not have the components on hand so I am experimenting with a net and an air stone. The attached photos and videos are how I spent my day. Suggestions from others who have successfully raised them from this stage would be much appreciated (@Thales, @cuttlegirl ...)

Incubator Attempt 1
First I tried placing the air stone underneath the netting. This was a no go because the net is finer than the bubbles so that air would become trapped underneath and then explode through the netting with enough force to exit the tank.

Incubator Attempt 2
Plain net with air stone placed inside. The weight of the air stone pulling the net caused the eggs to line up along the edge but not circulate. Photos is interesting but not very descriptive 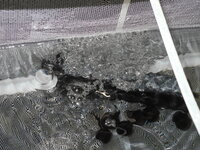 Incubator Attempt 3
I stacked two grids in the net (nets have a post to allow supporting the top grid) and sandwiched the air stone between the grids, placing the eggs on top. The current worked well to move the eggs but I became concerned about abrasion from the nylon grid. 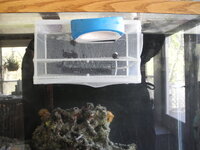 Incubator Attempt 4 (current configuration)
I placed one nylon grid underneath the net and secured it with a zip tie then placed the air stone on edge along the side of the net and tilted the net slightly toward the air stone. This does sweep the eggs up into the circular bubble stream at different points in time. They will circulate for awhile, fall where they are out of the motion and eventually get knocked by another egg back into the stream. I am still a bit concerned with abrasion as the eggs are lifted but the video suggest they don't actually touch the rough surface of the air stone. 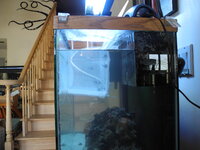 Cuttlefish lay and attach their eggs in crevices in the live rock, why do you think they need to be tumbled?

I wondered about any advantage to doing this with the bandensis and asked Bret if he had used his tumbler on this species (he confirmed). I think I have lost one from abrasion and turned off the circulation the AM. I also am concerned about the amount of light they receive since they usually hatch in the dark and am going to move them to the back wall and cover the top to darken the environment.

Not sure if it will work for the eggs, but I used a plastic critter ball as an attempt to give Kobe a toy. He never took to it, but they tumble very well from the circulation of the wave makers. They come in all sizes, clear and colored. Maybe putting an egg in each one of those would keep them isolated and better protected while tumbling through your tank. Also, maybe using dark colored ones would help with your lighting concerns.

Interesting idea but I will it exchange enough water to keep the water well oxygenated?

I think that gentle circulation would be better than being tumbled, because in the wild, they wouldn't be tumbled.

They are full of holes for air for the critters, so I think it is worth checking them out at your local pet store.

Well, I was sure I had at least another week but NOOOOO. I ordered fiddlers from Paul Sachs on Sunday because I am hoping for an O. briareus this week and won't know the size but did not order mysis. I think the egg I thought ruptured actually hatched or was in the process of hatching because early this AM I looked in on the net and found two tiny critters. Tonight a third has hatched and I still have 3 fully inflated eggs. I know they don't usually eat for the first couple of days and my first mysis should be here by Thursday. I am adding Cyclop-eeze to the net (we feed this to the tank anyway) and started a batch of brine (I KNOW, I KNOW but that is all I have in the house and my Tigger pods died in 24 hours - no clue why).

@cuttlegirl, the deflated eggs have a white/clearish gelatinous mass inside. Is this normal? The hatchlings look fully formed but with octopuses, all that remains is a thin skin. I don't see any yolk sacks so I am assuming these are not preemies. They sure are TINY! 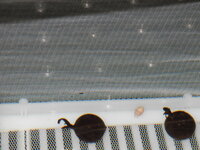 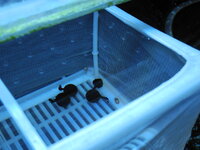 @TMoct 's close ups are soooo good and I was totally frustrated failing to focus with my macro setting that I went looking for a macro lens solution for my camera (Nikon P7100 - high end point and shoot, not DSLR). After a bit of reading and scrounging through my camera "stuff" I found out I could pick up an extension tube to fit my camera and use my (very) cheap macro/wide angle lens set from two camera's ago. For $8.00, I am excited to try it ($5.00 if I wanted to wait for shipping from China). In with the macro/wide angle lens I found a bunch of miscellaneous used filters I had acquired so I will experiment with trying to compensate for the red light (I believe I tried this years before without success though).

Oh, so cute. They have good color. I forgot how tiny they are...

D, are the deflated eggs the ones that hatched? Eggs that have died during development will have a whitish mass inside of them. How many eggs do you have?

This is what is odd. The 3 eggs that have mostly deflated have a whiteish gel inside but they have to be the egg casings from the ones that hatched. Today there are still two very firm round eggs, one that has deflated some since last night, three eggs that are open, shriveling and have jelly, and three hatchlings.

All three (I keep looking for a fourth because of the newly deflating egg) change color and hover from time to time but stay mostly along the net framing as in the picture. I have been putting pinches of frozen Cyclop-eeze into the net every 3 or 4 hours and at least one seems to go to the netting where it would be blown before leaving the net. My first order of mysis should be here tomorrow and none of my (very, very old) brine have hatched.

One more hatched tonight, so 4 hatchlings of 6 eggs so far. I still cannot tell if they are eating the Cyclop-eeze. They appear to be getting fatter and I don't think it is wishful thinking because I can spot the new hatchling but I will be glad to get the mysis tomorrow.

I also am not 100% sure which egg the last one came from. The one that was shrinking does not appear to have a split and one of the fully inflated may have. I am leaving both in the net until it is clear which one is empty but I suspect the largest one.

How are the kids?

There are still 4 hatchlings, one egg that is fully inflated and one egg that is shriveling. They are not eating the mysis but may be eating the Cyclop-eeze. So far they appear healthy but I am uncomfortable about their food consumption (or lack of it).

Fifth egg hatched and I cannot tell the new one from the four others. I don't know if this is a good thing (nice fat new hatch) or a bad thing (the other four are not growing). They don't seem to eat the mysis but do seem to eat the Cyclop-eeze so I continue to put new Cyclop-eeze in the tank 5 or 6 times a day and make sure I can see several mysis in the net. I moved the few remaining mysis to the net tonight and have more on the way that should arrive tomorrow. I think the mysis in the net are doing better than the group in the "tank" and may try a second net in the cuttle aquarium to just to see if it works better. I did get some chaeto today so this may help with survival in the mysis tank. We'll not discuss food bills!

I am pretty sure the sixth egg will not hatch. It shrunk to half size and may be shriveling (not 100% sure so I it still in the net).

I am still not sure what the 5 hatchlings are eating. I put Cyclop-eeze in the net two to three times a day (usually 3), have ordered my third supply of mysis and vacuum amphipods from one of the other tanks every other night. I have never seen them hunt but do see them hover when I introduce Cyclop-eeze. I still see amphipods in the net but not nearly as many as I put in. I can't find the mysis after a day but they are so tiny I am not sure the net keeps them inside.

At least one hovers often now and I look for him in the water column. Another can often be found near the top of the macro algae. The other three remain near the net floor under the macro algae most of the time and I don't see them until I disrupt the netting to circulate the food or attempt to remove some of the brown algae.