Hi everyone. I recently got an octopus whom I've named Davy Jones. He came from KP Aquatics and is from the warm waters off the coast of FL, but I don't know exactly what he is. He was sold as an "octopus", not a "dwarf octopus." According to other members here, the "octopus" from KP Aquatics tends to be O. Briareus, but he does not look like any pictures I've seen of O. Briareus.

His mantle is about 2" long at the most. I have not attempted to actually sex him by looking at his third arm and have just decided to call him a "he," so he may not actually be male. The most notable feature on him are the two spots below his eyes on either side. Here are two of the best pictures I've been able to get of him. Thanks for any help! 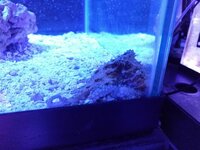 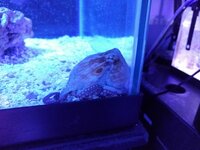 DWhatley said:
May I move this thread to the journals section in hopes that you will continue sharing your adventure?
Click to expand...

Upvote 0
You must log in or register to reply here.

G
Wet preservation of an Octopus