Cephs In Comics and Other Humor

The closest thing I could find to reality was an Oregon Street in Alconbury, UK (but not on the coast)

Phoenix girl's octopus joke goes national
I am not sure if this belongs here or in the Groaners thread but since it was submitted to a joke book by an eight year old, I will put it here.

Chloe's quip — How many tickles does it take to make an octopus laugh? Ten-tickles!
Click to expand...

How to create the plural form of octopus 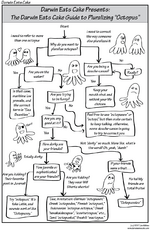 Video commercial with octopus that held up London traffic when the transporting truck broke down.

Someone sent this to me today. Made me smile!

@SkyFl, can you describe to me how you attached that image? It should show up without clicking but doesn't so I am trying to determine if we have a bug or if an alternate method should have been used. I can edit the post so it will show but want to leave it this way until we know your trick
S

I had the image saved on my computer, so I clicked "upload a file" on the bottom of the message and added the file. Let me know if I should do it differently in the future!

Nope, that is one of several ways images are expected to be uploaded. Interestingly, I see that the image is now displaying in the post so I have no clue why it acted peculiarly yesterday.


One Madison Octopus Car Wash location has finally given in to public demand and released back into the ocean the giant octopus it has exploited for over 50 years.
Since the 1960s, “Armando,” a giant Atlantic octopus, one of earth’s largest mollusks, has been forced to scrub down cars and sit atop a metal pole for hours on end, all in the name of profits.
In 1959, Thomas McGinty opened Express Car Wash on University Avenue, but struggled to attract customers. Facing bankruptcy, McGinty needed to make a change. While on vacation in Florida, he overheard a sailor’s yarn about pirates training octopi to clean barnacles from their ships. Realizing the business possibilities, McGinty contracted a scuba diver to catch him a juvenile octopus the very next day.
Octopus Car Wash was born.
Armando grew quickly, as did McGinty’s clientele. Madisonians lined up to see the enormous cephalopod, who in his prime could wash four cars at once. Over the next few decades, McGinty managed to capture several other octopi and opened four other locations in Wisconsin and Illinois.
Up the pole. Down the pole. Wash. Wash. Wash. That was Armando’s life for decades. The novelty wore off, and the giant octopus grew old and tired. In 1988, machines became more cost-effictive than tentacles, and Armando was relegated exclusively to the pole. It seemed as though he’d be there for the rest of his life.
However, in 2013, animal rights groups started voicing their concerns.
PETA championed the octopus’ cause, utilizing social media to tell Armando’s story.
Their campaign quickly went viral. In March 2014, #ArmandosSmile began trending nationally on Twitter, a reference to the mollusk’s steadfast grin.
It wasn’t long before picketers calling for Armando’s release lined University Avenue.
Tuesday, in the face of mounting social and political pressure, Thomas McGinty, Jr., current owner of Octopus Car Wash, granted Armando his freedom.
PETA sprung to action. Drawing from their multi-million dollar “Free Armando” fund, they chartered a helicopter to airlift the 600-pound mollusk to the Gulf of Mexico.
By Wednesday afternoon, Armando was happily clambering over reefs off the very same beach where he was kidnapped 50 years ago.
Armando is free. But his brothers and sisters are not. PETA President Matthew Wright says he won’t rest until all Octopus Car Wash octopi are returned to their natural habitats.
“We aren’t going to let these businessmen exploit cheap octopus labor any longer,” Wright said.
At press time, sources reported that a vacationing McGinty, Jr. had netted a giant squid off the coast of Hawaii.
Click to expand...