For many cephalopod enthusiasts, seeing the Walt Disney production of "20,000 Leagues Under the Sea" marked an epiphany. It didn't matter that the giant squid was too big,too slow and had an upside-down white beak. It was a movie monster that defeated the standard bromide administered by adults to freaked-out children: "Don't worry, there's no such thing."

Walt Disney has now released the landmark 1954 film in a two-disc DVD format. The original Cinemascope aspect-ratio of 2.55:1 has been preserved, and the color transfer does justice to the Technicolor process. (The DVD packaging states that the film has been "restored," but there are some hard-to-miss flaws on the print.) Most TONMO.com members have probably only seen this film on television or by playing the old, pan-and-scan video cassette, so viewing this DVD may present a series of pleasant shocks. Cinemascope was in its infancy when the film was made, and director Richard Fleischer took to the ultra-widescreen format with zest. Some of the compositions are utterly beautiful, and the film's format encouraged the production team to fill every available inch of sets, scenery and miniatures with inspired detailing and color.

"20,000 Leagues Under the Sea" hasn't weathered the years entirely well. The clownish cannibals who attempt to board the Nautilus have accrued a discomfiting patina of racist condescension, and Kirk Douglas's enthusiasm can't save the film's sole musical number, "A Whale of a Tail," from being seen for what it was: a shameless marketing gimmick. The pleasures greatly outweigh the pains, however. Some pleasures are purely visual, like the strobing interplay of the blood-red velvet of Nemo's salon with the blue iron of the Nautilus's hull. Others are aural, the whine of the submarine's engines as she streaks toward a doomed ship. James Mason remains the definitive cinematic incarnation of Nemo, Peter Lorre is a Conseil not to be messed with, and Kirk Douglas serves Ned Land with the proper ratio of booze and ham. There are almost subliminal touches: near the end, after Captain Nemo has put his island workshop to the torch, a mushroom cloud engulfs a group of ships arrayed around the island, a Victorian-era echo of the A-bomb tests conducted at Bikini Atoll. It's an odd touch of modern dread, but fully in keeping with the story's ambivalent appraisal of technology and its destinations.

The producers of this special edition were evidently aware of how central to the film's popular success and reputation the giant squid was, and the features do not disappoint. Production galleries on the second, supplemental disc include copious paintings and drawings done in the film's conceptual phase, and some of them are remarkably well-observed and evocative. (One quick and mean watercolor could easily pass as a portrait of the colossal squid, Mesonychoteuthis hamiltoni.) The producers have also included a short film titled "The Humboldt Squid: A Real Sea-Monster!" which has some good footage of Dosidicus gigas mugging divers in the Sea of Cortez.

The plum inclusion, however, is a 16mm edit of the "squid fight" as it was originally shot. As director Fleischer notes in his commentary, this first shoot jeopardized the entire production: it was an unmitigated disaster, with a failure-prone mechanical squid and a tranquil sunset backdrop that revealed every cable and flaw in brutal detail. An all-new new squid was built and the setting changed, from light to dark, calm to storm-lashed, and the re-shot squid fight more than justified the delays and cost-overruns. Taken along with the wonderful concept drawings, storyboards and publicity films included on the DVD, the "Sunset Squid" episode demonstrates that the giant squid was far more than an effects-sequence: it was an integral part of Walt Disney's conception of the film, and the squid a character in its own right. 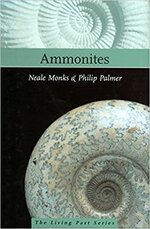 The Natural History Museum (2002). ISBN 0-565-09169-7 160 pages softback. Review by @Phil Eyden Ammonites are one of the first fossils we all hear about at school. We all know they were related to squids and octopi, generally have spiral shells and died out along with the dinosaurs 65... 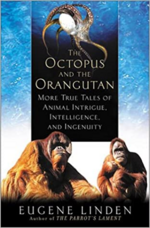 Cephalopod Book & Movie Reviews
The Octopus and the Orangutan (Book)

by Eugene Linden Dutton, 242 pp, hardcover, 2002 ~ Reviewed by nanoteuthis ~ Consider the octopus, one of the most enduring and successful designs nature ever perfected. (p. 23) Thus begins the first of two chapters on Octopus intelligence – "The Riddle of the Octopus" and "Octopus... 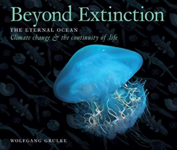 With good cause, the past 20 years has seen an explosion of articles, publications and books dealing with the impacts of climate change. Wolfgang Grulke's beautifully illustrated Beyond Extinction: The Eternal Ocean - Climate change & the continuity of life explores the organisms throughout... 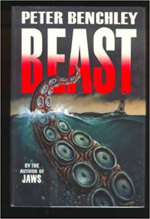 Review By Richard Ellis [The following is excerpted from Search for the Giant Squid, by Richard Ellis. Reproduced with permission of the author.] Peter Benchley's novel Beast was published in 1991, and like all of his "man-eating monster" stories, it became a best seller. Jaws was a... 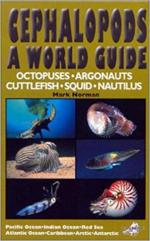 Reviewed by Nancy King Cephalopods, A World Guide is an attractive guide that covers the octopuses, argonauts, cuttlefish, squid and nautilus of the world. Several TONMO community members have already recommended this outstanding reference work, which is published in Germany. Arranged by...